“THE BEST OF”
OUT NOW

FEATURES FAN FAVORITES “ONE DAY LIKE THIS,” “GROUNDS FOR DIVORCE,” “NEW YORK MORNING,” “LIPPY KIDS,” AND MANY MORE.

PERFORMED LIVE ON NBC’S THE TONIGHT SHOW WITH JIMMY FALLON AND CBS’ THIS MORNING: SATURDAY THIS MONTH

Manchester band elbow just wrapped a successful and SOLD-OUT run across North America this month, which included a late night television performance on NBC’s The Tonight Show Starring Jimmy Fallon, where they performed current single “Magnificent (she says)” [WATCH HERE], and “One Day Like This” [WATCH HERE], plus A day-time television performance and interview with esteemed host Anthony Mason on CBS’ This Morning: Saturday.  Watch their performance of “Magnificent (she Says)” HERE, “Grounds For Divorce” HERE and “All Disco” HERE. The band also played awe-inspiring live sessions for WNYC’s Soundcheck [LISTEN HERE] and KCRW’s Morning Becomes Eclectic [WATCH HERE].

On Friday, November 24 the band also released their latest full-length album “The Best Of” via Republic Records in North America. A collection of their best moments to date, the album covers two CDs (in its deluxe form) and features tracks from the band’s seven studio albums, highlighting their incredible musical output over the last eighteen years. From the release of their “Newborn” EP in 1999, the collection stretches all the way to 2017, with the bonus track of the band’s version of The Beatles “Golden Slumbers,” as heard on the current John Lewis Christmas commercial directed by Michel Gondry [WATCH HERE].

“Best Of’s are a good way of introducing new fans to a big back catalogue.” Explains front man and lyricist Guy Garvey on the band’s reasoning behind this release. “My first Leonard Cohen album was ‘The Best Of’, same with Fleetwood Mac and Nick Drake. It took ages for us to decide what should go on ours but we got there in the end. We are really proud of this. It’s full of memories.”

“The Best Of” comes in two versions. The standard version features global hits “One Day Like This” and “Grounds For Divorce,” alongside their current US single “Magnificent (She Says),” taken from the band’s current studio album and UK Number One, “Little Fictions.” Earlier work is represented by live favorites “Mirrorball,” “Scattered Black and Whites,” “Leaders Of The Free World” and “Lippy Kids,” “a gorgeous meditation on adolescence” (The Guardian) and a stand out moment in all elbow live shows.

The second version is the deluxe release, which goes further into the band’s history and album releases, again spanning their entire career to date. The song that first brought the band to mass public attention, “Newborn,” is included along with its follow up and fellow NME Single Of The Week, “Any Day Now” and “The Loneliness of a Tower Crane Driver’” the song the band performed live on the night that they won the 2008 Mercury Music Prize for “The Seldom Seen Kid.” This version also contains the band’s most recent original recording, “Kindling (Fickle Flame)” featuring John Grant.

The album highlights an incredible ongoing career which has encompassed two Ivor Novello awards, the quadruple platinum album “The Seldom Seen Kid” and two UK Number One albums; 2014’s “The Take Off and Landing of Everything” and this year’s “Little Fictions.” In that time, the band have won 2008’s Mercury Music Prize (for “The Seldom Seen Kid”), the 2009 BRITS ‘Best British Group’ and a host of NME, Q and Mojo Awards.

elbow have been lauded for one of the landmark Pyramid Stage performances at Glastonbury Festival, collaborated with the BBC Concert Orchestra and Manchester’s Hallé Orchestra. In 2012 they were commissioned to write ‘First Steps’ which sound-tracked the BBC’S London Olympics TV coverage with the band also performing at the closing ceremony in the Olympic Stadium to a global television audience of 750 million people.  This year’s secret appearance at Glastonbury’s Park Stage drew a record crowd on site and was the most watched set from the festival on BBC.

Always a band that has attracted deserved critical praise for their recordings, (elbow were the first act in history to receive four consecutive 9/10 album reviews from NME), this best of album is the perfect introduction to the amazing musical legacy to date of one of the country’s most beloved and most successful acts, demonstrating that most rare thing in modern music; a band whose story and influence continues to grow with every release.

“The Best Of” is available in the U.S as a standard and deluxe digital download from 24th November.

Advance purchasers of the digital download will receive “Golden Slumbers” on receipt of order.

50% of Questions to be Chosen from Top Questions Submitted and Voted On By the Public at OpenDebateQuestions.com

Tuesday at 7pm on NY1 News, New York’s mayoral candidates will face off in the first-ever, bottom-up mayoral Open Debate. The October 10 debate will be between New York Mayor Bill de Blasio (D), Nicole Malliotakis (R), and Bo Dietl (I). Moderators will dedicate half of the 90-minute debate to top questions submitted and voted on by the public at the bottom-up platform, OpenDebateQuestions.com.
Over 33,000 votes have been cast on user-submitted questions. Some of the top questions cover issues like homelessness, housing issues, Vision Zero, police reform, and recycling.

Lilia Tamm Dixon, director of the Open Debate Coalition said: “The Open Debate Coalition is very excited to bring our bottom-up format to the local level after great success in having questions from the public included in presidential, governor, and senate debates in 2016. New York City will help us prove that Open Debates should be the new norm in American politics — inserting the will of the people more into races for President, Congress, Governor, Legislature, Mayor, and other offices.”

The same platform will also be used to source questions from the public for next week’s public advocate and comptroller debates, on Oct. 16 and 17, respectively.
The cross-partisan Open Debate Coalition is partnering with NY1 News, Politico, WNYC, Citizens Union, Intelligence Squared, the Latino Leadership Institute, and Civic Hall on this historic project.

Question submission and voting is now open at OpenDebateQuestions.com and lasts through 12 noon on Monday, October 16, just before the public advocate debate. Anyone across the nation can submit and vote on questions. Only New York City votes will be counted when selecting the top 40 questions, but others nationwide can cast votes to impact which questions are trending on the site — influencing which questions voters see and vote on most.

The Open Debate Coalition made history last year when it was prominently credited as a source of questions in two presidential debates between Donald Trump and Hillary Clinton. After 3.6 million votes were cast online, ABC’s Martha Raddatz and Fox’s Chris Wallace cited the Open Debate Coalition by name during the live debates in front of their combined audience of more than 100 million people, and asked questions from the coalition’s voting platform. Open Debates for Senate and Governor were also held last year. 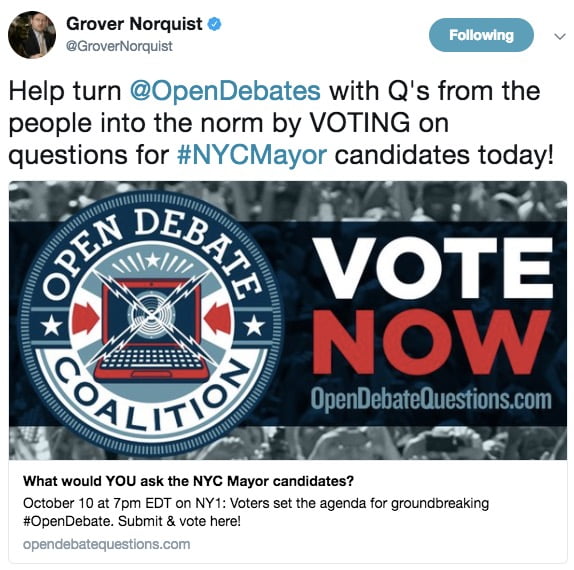 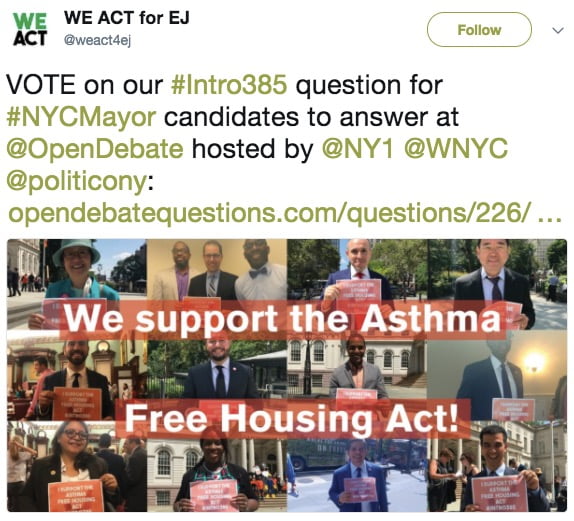 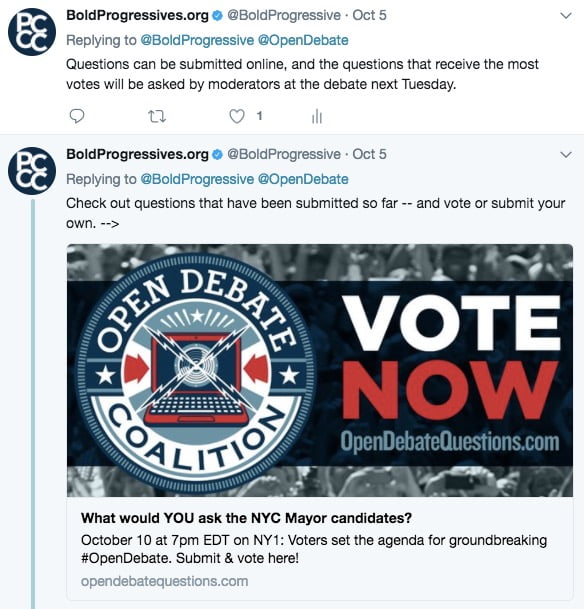 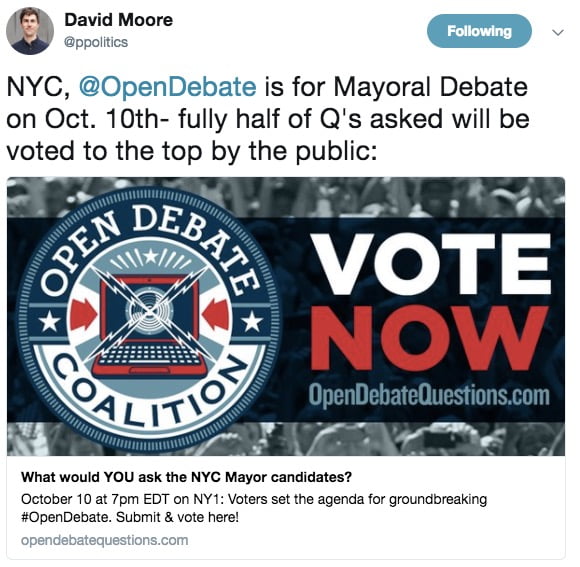 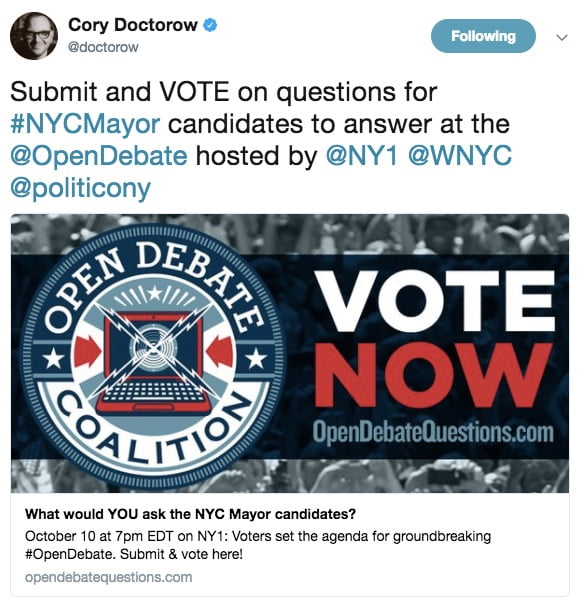 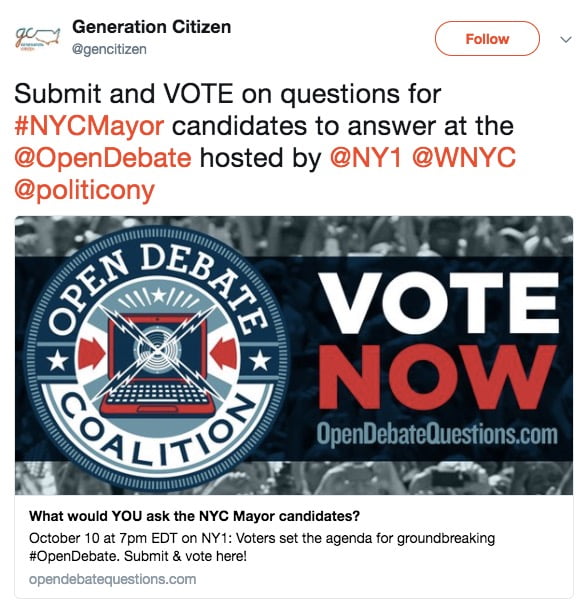 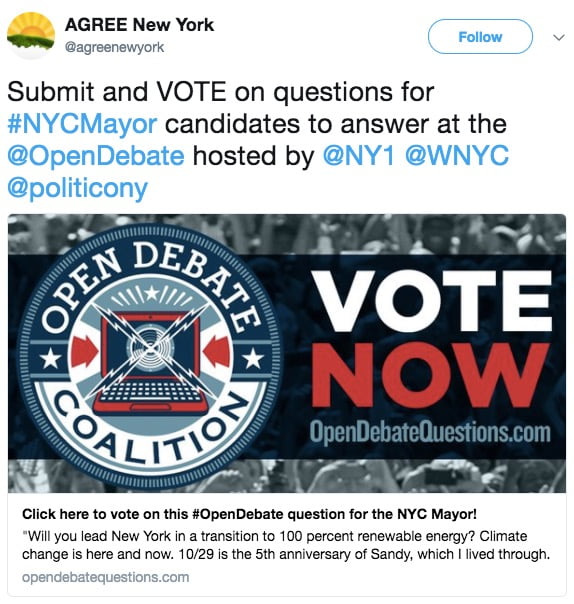 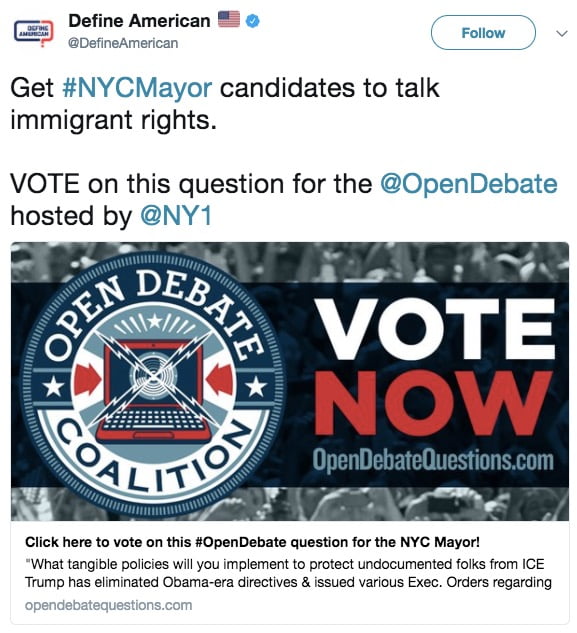 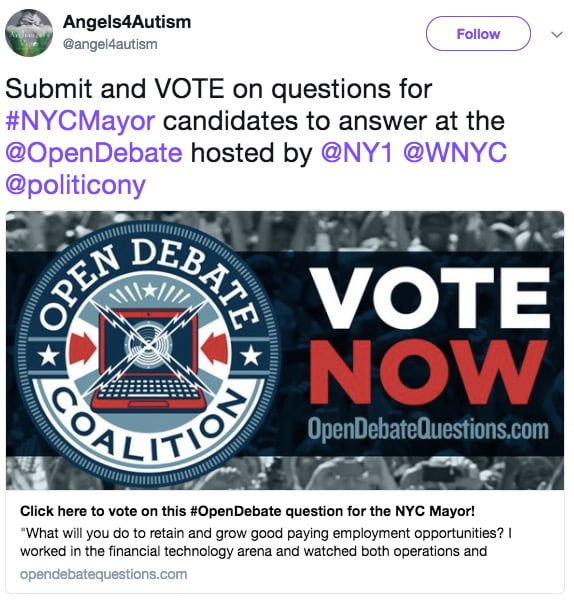 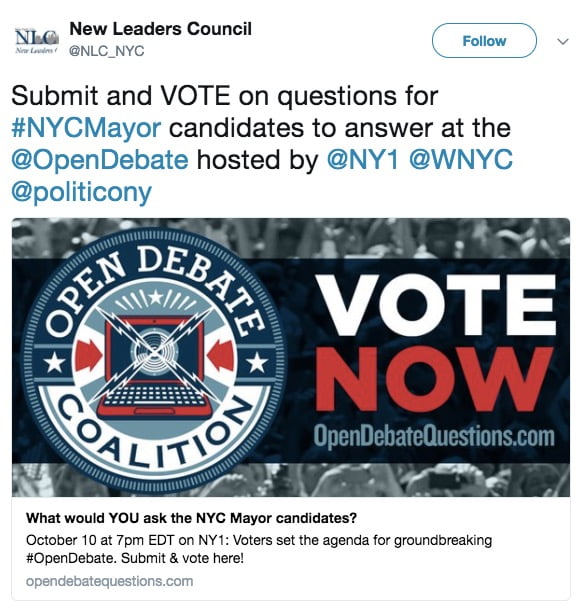 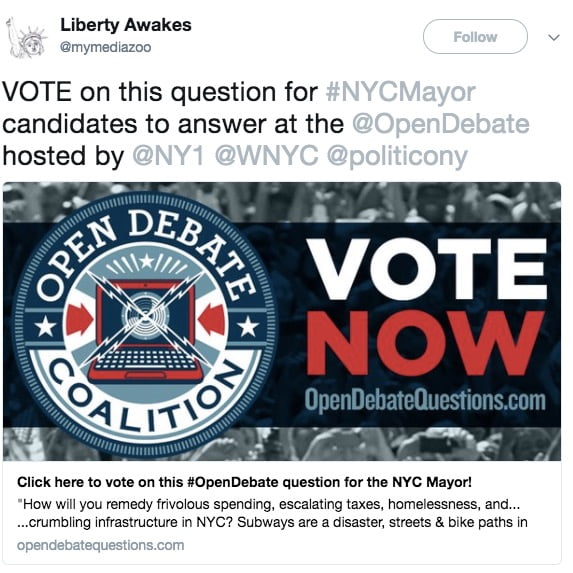 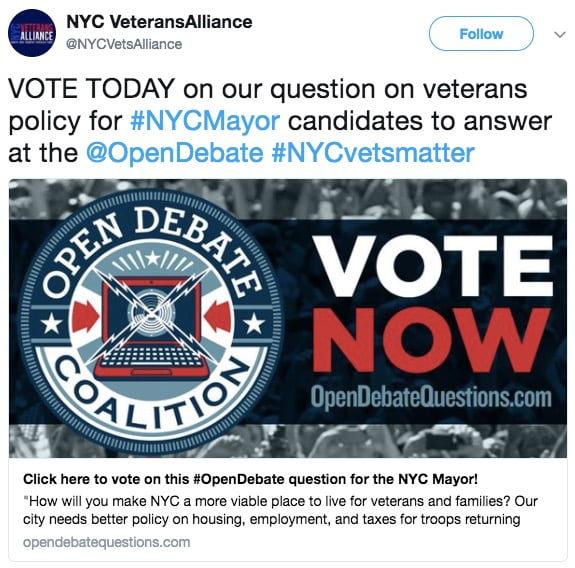 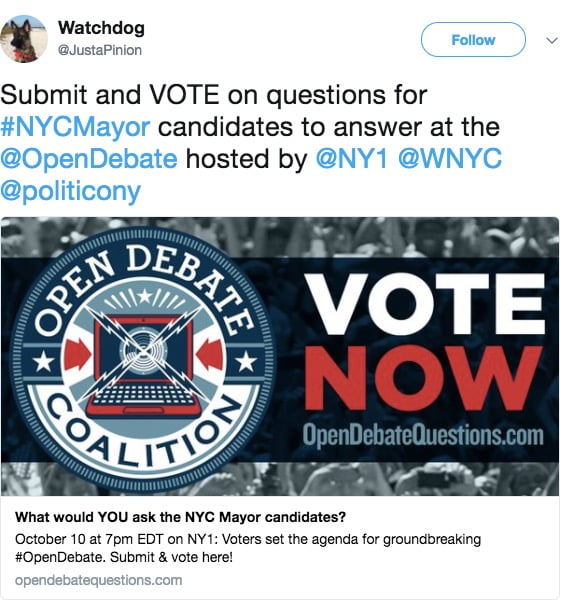 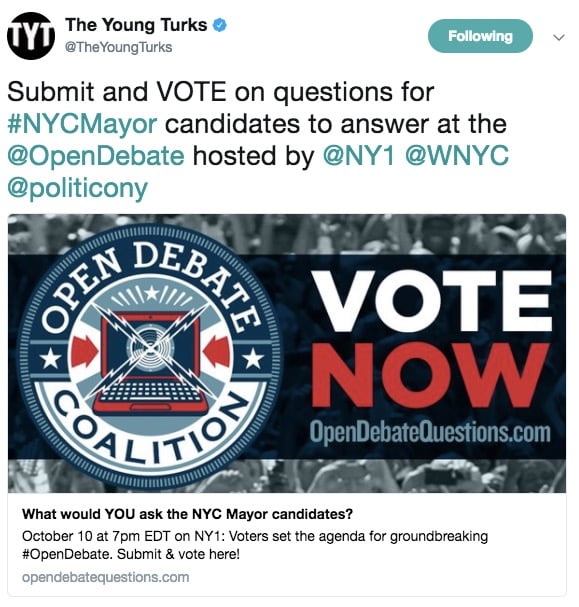