This track is the first of four singles included in his very first EP. It sets off his singles release chain and leads the way for the rest of his EP like a trailblazing fire. “Very Special” is an island-electro-hybrid that brings together the reminiscent vocals of Sean Kingston and the “summery vibe” mix, signature to PLS&TY.

“Very Special” circulates on the audience’s feeling of either remembering or creating very special memories. Sean Kingston’s vocals play a major role in this tropical vibe summer track that will definitely be a favorite of the year. The track is a perfect mashup of Future Bass and the island melodies that Sean Kingston never disappoints with.

PLS&TY: “I’ve simply been a fan of Sean Kingston ever since I heard “Beautiful Girls” on the radio years ago. His single “Take You There” is also one of my personal favorite records of all time. It came about via connecting over email and him enjoying the instrumental that we sent over. I see this song and EP as a true embodiment and showcasing of the PLS&TY brand as a whole — spreading ‘good vibes’ and a positive message, with a mantra rooted in ‘minding your manners’”.

Sean Kingston: “PLS&TY is a great artist and I really enjoy his feel-good music. I always do lively, happy music, and love it more than anything! It was fun to collaborate with an artist from a different genre with the same vibe and vision. This is for the fans!”

He also has had a busy festival season in 2019 of some 10 plus festivals including Shaky Beats, Breakaway, Electric Forest, EDC Vegas, and more. In this year, 2020 will see PLS&TY stepping into his own with the “Very Special EP,” amongst confirmed performances at the renowned Bonnaroo Music & Arts Festival and more.

Over the last year, Sean released “summer anthem” hit tracks such as “Peace of Mind” with Tory Lanez and Davido, and “How Many Times” with Afro Bros. Currently, he is busy preparing new music to be released including his EP “Made in Jamaica” in 2020. As an in-demand songwriter, Sean has also been working with stars including T.I., Wiz Khalifa, and Chris Brown.

For the album, he attracted an A-list crop of collaborators, including Atlanta royalty T.I. who delivers an unforgettable verse on the aptly titled “King,”Tory Lanez who lends his unmistakable vocals to “Risk It All.”  While Bluff City and Migos front-man Quavo appear on the heartfelt “All You Need.”  Not to mention, the current single “Verify” boasts bars from Young Thug and Gunna. The latter amassed over 4.1 million Spotify streams and 6.9 million YouTube views to date in addition to receiving looks from Rolling Stone, Hypebeast, Rap-Up, and more.

Additionally, the visual for the next single off the album, “Fact or Fiction” premieres on both BET and MTV today. Beginning at 8am, the video will broadcast at the top of each video block on MTVU, MTV Live, BET Jams, and BET Soul as well as TRL’s Fresh Out Friday with Sway. Moreover, it also plays on the legendary Times Square ViacomBillboard at 12 noon and 5pm, taking over New York city in the process. Watch the video HERE.

Jacquees’ single “You,” from his debut album 4275 was Certified RIAA Platinum earlier this year.  The song also appeared on the Documentary Soundtrack for Before Anythang in addition to gracing the track-listing of Lost At Sea II—his recent collaborative project with Birdman. This is his second single to be certified by the RIAA following on the heels of the platinum “B.E.D.” In addition, he sold out shows coast to coast on his 4275 Tour.

UTA has announced its representation of Chance the Rapper in all areas and for worldwide bookings outside the US and Canada. UTA will work with Chance across his entire business, focusing on global touring, brand partnerships, acting, producing, licensing and synchronization, speaking engagements, books, charity work and more.

One of the leading voices in the pop culture landscape, Chance is a rapper, singer, songwriter, actor, producer, philanthropist and activist. Most recently, he released his highly anticipated debut studio album The Big Day in July 2019. The record launched at No. 2 on the Billboard 200, marking his highest-charting album to date. Three singles from the album, “Hot Shower” featuring MadeinTYO & DaBaby, “All Day Long” featuring John Legend, and “Do You Remember” featuring Death Cab for Cutie, all broke into the Billboard Top 100 singles chart. With his three new hits, Chance has charted 12 Hot 100 singles throughout his career.

Prior to The Big Day, Chance won three Grammy awards in 2017 for his third mixtape Coloring Book, including “Best Rap Album,” “Best New Artist” and “Best Rap Performance” for his single “No Problem.” The mixtape made history as the first time a streaming-only record won a Grammy. In the same year, he became the first unsigned artist to ever host and perform on Saturday Night Live. Chance first broke into the music industry in 2012 with his debut mixtape 10 Day and gained mainstream recognition in 2013 with the Acid Rap mixtape.

Throughout his career, he has collaborated with a diverse range of artists including Childish Gambino, Nicki Minaj, Erykah Badu, Justin Bieber, Megan Thee Stallion, Action Bronson, Madonna and Shawn Mendes, among others.

A celebrated arena and festival headliner, Chance has toplined Lollapalooza (Chicago and South America), Life is Beautiful, Sasquatch, LoveBox, and Summer Sonic. In 2016, Chance also produced his own festival Magnificent Coloring Day in his native Chicago. The sold-out festival, which took place at the White Sox’s Cellular One Field, set an attendance record at the park with over 47,000 attendees. The all-star lineup included performances by Kanye West and Legend as well as Alicia Keys, Common, Lil Wayne, 2 Chainz, Skrillex, Tyler, The Creator, Lil Uzi Vert and Francis and the Lights. Global tour dates for 2020 are forthcoming.

Outside of his musical accomplishments, Chance is a rising player across film and television spaces. He recently voiced a character in the 2019 live-action reboot of The Lion King. Other acting credits include the crime comedy Slice; the Cartoon Network movie Steven Universe: The Movie, which he also executive produced; and several short films. Additionally, he served as an executive producer on the basketball documentary Shot in the Dark alongside NBA superstar Dwayne Wade. Next up, he will serve as a judge and executive producer on the unscripted Netflix series Rhythm + Flow, also starring Cardi B and T.I.

Chance is a humanitarian in his hometown of Chicago. He founded SocialWorks, a charity aiming to create programs to empower and educate youth. Its focus on education, mental health, homelessness, and performing and literary arts directly affects thousands of youth yearly. Chance has donated two million dollars to Chicago Public Schools and mental wellness access, and through SocialWorks has raised over seven million dollars for Chicago’s Youth.

OMB PEEZY DROPS MUSIC VIDEO
“WHERE I COME FROM“
Mixtape Ft. G-Eazy, Lil Durk, Sada Baby, T.I. & Boosie Badazz Out Now
.
.
OMB Peezy just dropped his latest mixtape, Preacher to the Streets, with guest appearances from G-Eazy, Boosie Badazz, Lil Durk, Sada Baby and more via 300 Entertainment and E-40’s Sick Wid It Records. Now the Alabama native also blessed fans with his “Where I Come From,” the latest visual release from his star-studded mixtape.
Be sure to take a look at “Where I Come From” and check out Peezy’s new series Hood Essentials.
.
.
VIDEO – WHERE I COME FROM: https://youtu.be/rFpaO_p8iII
MIXTAPE – PREACHER TO THE STREETS: https://ombpeezy.ffm.to/ptts
COMEDY SERIES – HOOD ESSENTIALS: https://www.youtube.com/watch?v=RrRYNKG4-ck&list=PL8Ucth1S6j2OrJk0PsaZ3ojMCFlN8Xxja
.
.
OMB Peezy Socials:
Instagram: https://www.instagram.com/omb_peezy
Twitter: https://twitter.com/omb_peezy
Soundcloud: https://soundcloud.com/over-kill-peezy
YouTube: https://www.youtube.com/channel/UCIQuI6sA73cV6AdoeXAKIEQ
Facebook: https://www.facebook.com/ombpeezy1/
.
.
CRITICAL PRAISE:
“Peezy’s music blends the funk of the Bay with the rawness of the Deep South”  ~Pitchfork
“OMB Peezy is tough but melodic, with a youthfully urgent voice and production that’s indebted to Louisiana and California.” ~New York Times
“This kid from Alabama is the future of rap.” ~The FADER

The strategy evolved when Geter and Harris made their first investment 12 years ago into a company called Streetcred.com, a site that allowed fans to go online and share opinions about street culture. While that first deal didn’t work out, Geter and Harris maintained interest in the technology and startup scene to create opportunities for their networks and promote new businesses.

“We learned a lot,” says Harris. “Now, we know where our demographic is.”

For Geter, that demographic is taking advantage of Atlanta’s surging position as a cultural and technological mecca in the United States. Indeed, Atlanta-area startups raised roughly $1.15 billion in 2018, a record for the region, according to data from PitchBook and the National Venture Capital Association.

“Being in the city of Atlanta and with Georgia Tech producing so much talent, and coming from us being within the hip-hop culture, which is always influencing and promoting things, we saw an opportunity,” says Geter. “In the past, we were always looking through the glass window and looking at ways we can participate earlier. And that’s by coming together to pool our resources so we can invest more.”

Through informed mentorship programs and partnerships, Tech Cypha will include using influencers in various fields. Currently, the syndicate includes Lil Duval, Killer Mike, Tamika ‘Tiny’ Harris, Tai Green, Korey Roberson, Stephanie Shirley, and BJ Kerr among others. As an industry leader, Lewis is known for his talent in branding, marketing and partnership deals.

“Often times, we drive technology like social media and apps, but we are never apart of the ownership,” Lewis continues, “Tech Cypha is going to be an investment vehicle looking for promising, early and late-stage startups to invest capital in, assist with marketing and give branding directions. It’s our way of bridging the gap between the culture and technology.”

Los Angeles, CA – July 19, 2018 – Singer – Songwriter & Producer duo, WATCH THE DUCK (i am OTHER/Interscope Records) will be embarking on a multi-city Sunsets & Slow Grind tour this summer. Kicking off in Dallas, Texas on July 20, the tour will also feature Rico Davis, Andreaevolves and a host of special guests. Check out the official tour video HERE.

Comprised of friends Eddie Smith III and Jesse Rankins, the group hails from Montgomery, Alabama. After building their name behind-the-scenes as producers, the group launched a career as artists in their own right. WATCH THE DUCK has consistently delivered through solo projects, featuring some of music’s biggest names, including: T.I., ScHoolboy Q, Afrojack and Steve Aoki. Currently under the guidance of Pharrell Williams, WATCH THE DUCK recently released their self-produced debut album, Delayed Adulthood under the duo’s newly created imprint called Children Need Exercise. It features their first single “There You Are.” 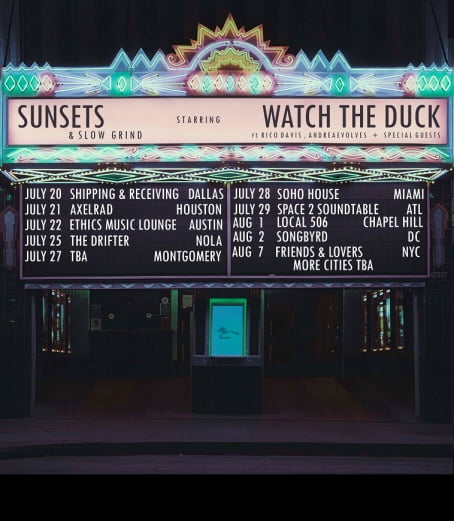 Nika Card has been a master stylist in Detroit for 20+ years. She is committed to continuing education and the importance of creativity and innovation. She offers a range of techniques in cutting, weaving and styling.

Known as home for everyone from 50 Cent and Nas to A Tribe Called Quest and Nicki Minaj, Queens has bred yet another hip-hop heavyweight. The borough’s brightest new voice lougotcash shares his official major label debut single “Make 10” today. Listen to it HERE.

A knockout combo of gritty production and airtight rhymes, “Make 10” has impressively racked up over 1.5 million Soundcloud plays and 542K Spotify streams and counting independently Thru DJ Self’s Gwinin Entertainment Label. It’s the perfect introduction to this buzzing new artist.

Already, lougotcash has performed alongside titans such as T.I. and Plies and earned the endorsement of another hometown heavy hitter, 50 Cent who proclaimed, “The young bull is ready.”

Stay tuned for big things from lougotcash in 2017 as he makes Queens and East Coast hip-hop proud.