The Emerald Isle and Scottish Highlands are brimming with iconic landmarks (a.k.a tourist traps). But what about those who want more than a pint of Guinness or a bite of haggis? Wilderness  Scotland  (Europe’s No. 1 Rated Adventure Travel Company) and sister company  Wilderness  Ireland  offer Tailor Made trips designed by locals and delivered by local legends—making them a great way to discover the essence of a place in a way that few visitors have access to.

From enjoying a moonlight paddle in Yeats Country—home to unparalleled star gazing—to uncovering the secrets of the Loch Ness Monster to rappelling off sea stacks, Wilderness’ Tailor Made adventures unearth the true character of the destination.

Forget everything you thought you knew about Ireland and Scotland with these one-of-a-kind experiences:

On a camping expedition in Sligo, Ireland, hike the breathtaking lakes, mountains, beaches and waterfalls that once inspired many of the great works of the Nobel Prize winning writer, W. B. Yeats. As the sun sets, hop in a kayak for a nighttime paddle on the “Lake Isle of Inisfree” to a private island. Leap onto the sand where a forested paradise awaits, along with a night of glamping in one of the world’s premier stargazing destinations. But first, enjoy wood-fired pizzas al fresco, while a local expert shares in the tales and legends of the area.

Hunt for Nessie with a Career Monster Tracker

While Scotland is known for its legends and fables, none are quite as famous as the Loch Ness Monster. While considered by some as folklore, the storied creature has been likened by scientists to a plesiosaur that dates back to the end of the last ice age. To unearth the history of the mystical creature, meet Adrian Shine, a naturalist and researcher, for a private boat ride as he shares his insider knowledge after years of studying Nessie. You’ll fly across the waters of Loch Ness, one of the largest and deepest expanses of water in the UK, as you search for this elusive creature.

Spend the Night in Your Own Private Castle

Nestled in the countryside on 500-acres lies a palace straight out of a fairytale—Aldourie Castle—and it’s easily bookable for a private rental for you and your closest 20 friends with Wilderness Scotland. This rare experience is set on the shores of Loch Ness, where well-tended courtyards, 16th-century gardens and horseback riding can be found as you stroll vast woodland grounds. For a closer look at the garden’s soaring pergolas, meet with your private guide for a tour, while keeping eyes peeled for deer, sea eagles and even basking sharks—the world’s second-largest fish. Stop for a tour at a world-famous malt whisky distillery to sip the Scottish ‘Water of Life,’ or hop in a sea kayak to observe the ruins of nearby Urquhart Castle from the water.

Cast a Line with an Expert Ghillie

Grab your waders and wellies for an unforgettable fishing experience with one of Scotland’s most knowledgeable fishing expeditioners. Take to the Highlands to uncover the locals’ best-kept fishing spots along the River Tay in Perthshire. Here, anglers can find the country’s most iconic species—Atlantic salmon—along with pike, rainbow trout and pollock. Cheers to the catch of the day with a glass of distilled whisky on the riverbank.

Forage for Juniper to Make Your Own Gin

While whisky may be the official drink of Ireland, gin is also a popular local tipple. In Ireland’s Ancient East, you can learn the complicated science behind every bottle of Irish-made gin. Head into the forest with a naturalist guide to forage for fresh ingredients, such as juniper and other herbs. Then, head to an exclusive gin school to distill a bottle with your own herbs—making for a memorable souvenir.

Climb a Sea Stack High Above the Atlantic

Head to what Ireland’s Donegal County calls “the most climbable rocks in Ireland” to unearth a secret spot where you’ll be suspended above the Atlantic waves for an adrenaline-fueled climb. But first, visit one of the area’s most remote spots to meet the local Gaelic-speaking characters who call the area home. They’ll guide you through the history of the separation between Northern and Southern Ireland, the basic knowledge of the Gaelic language and their local traditions. Then, you’ll be whisked away to a tiny island, where you’ll climb to the top of a sea stack, then rappel down the steep cliffside high above ocean waves.

For 2018 – Cliffs and Castles, Food and Fiddles

Inquisitive adventure travelers would be wise to put Ireland on their tour map for 2018. Vagabond Adventure Tours, Ireland’s award-winning tour operator serving fit and active travelers, and its complementary division, Driftwood Journeys of Discovery that emphasizes unique scenery, culture and history at a more relaxed pace, have added new tours and itinerary embellishments for the coming year.

“From the addition of unique accommodations to totally brand-new tours, 2018 is shaping up to be our most exciting new year!” says Amy Rankin, co-founder and director of Vagabond Small-Group Tours of Ireland (https://vagabondtoursofireland.com/). New from Driftwood Journeys of Discovery 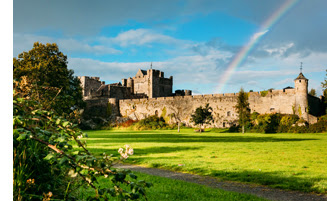 With multiple departures scheduled for May into September 2018, Vagabond’s Driftwood Journeys of Discovery is launching a new leisurely paced 7 Day Kerry UnCorked Tour through Ireland’s southwest including two nights in Ireland’s foodie capital, Kinsale, where guests savor sea food, visit craft breweries and enjoy whiskey tasting in a local pub. Another stop with plenty of time allotted for exploring is Dingle where galleries and pubs (54 at last count) abound. The itinerary embraces visits to ancient ruins and lunar landscapes, planting a kiss on the Blarney Stone, watching the centuries-bred instincts of working sheep dogs, strolling through stately homes and gardens, being spell-bound by the green fields and stone walls of Dingle and Ireland’s wild and rugged Atlantic coastline where near the Cliffs of Moher in the Burren original Irish music still emanates. The gateway city is Dublin. The per person double rate is €1,699 (€300 single supplement). For more details see: https://vagabondtoursofireland.com/tour/cultural-ireland-tour-7-day/. 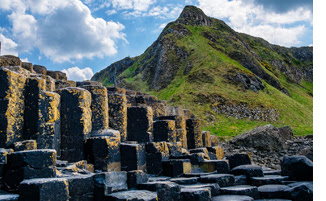 Driftwood Journeys of Discovery’s 6 Day Northern Island Tour lavishes guests inclined to leisurely paced culture with castles and manor house estates on whose walls is written much of Northern Island’s resiliency. Appetites for grandeur are whetted on Day 1 at two Palladian-style estates, Castletown House on 550 acres maintained by the Guinness fortune, and Strokestown Park and The Irish National Famine Museum. Sweet dreams this night are within the confines of Markee Castle Hotel. After extensive renovation to become an accommodation, as of 2017 this family-owned castle-hotel is the fourth member of Romantic Castles of Ireland and a new addition to this itinerary. Guests also get tweedy in Donegal, home of the famous weave and Donegal Castle and they’re imbued in clan lore at Dunluce Castle, the McDonald stronghold. One night they sleep with ghosts in 17th century Ballygally Castle. Another recent addition to this tour is a night at a Victorian red brick masterpiece right on the beach, Slieve Donard Resort and Spa. Over six days guests enjoy jaw-dropping vistas atop Atlantic Ocean cliffs; the UNESCO World Heritage Site, Giant’s Causeway; Celtic myths and monasteries; walks on the beach along the Wild Atlantic Way; fiddle-filled pubs, tours of cultural hubs and more. The gateway city is Dublin. Scheduled departures run from April through October. The rate per person double is €1,509 (single supplement €210). For details see https://vagabondtoursofireland.com/tour/6-day-northern-ireland-tour/. New from Vagabond Adventure Tours 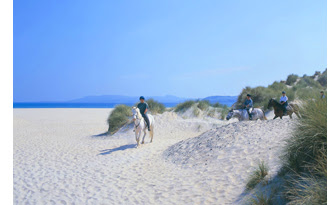 The gateway is Dublin. The rate per person double is €1,619 (€220 single supplement). Weekly departures are scheduled from late April through September, 2018. For details see https://vagabondtoursofireland.com/tour/7-day-magnetic-north-northern-ireland-adventure-tour/. 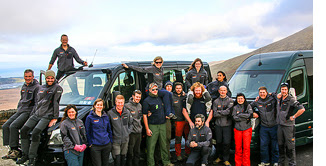 Also beginning in 2018, all tours that include Galway will linger a bit longer here giving guests at least two hours for exploring and shopping in this bustling city. From Eyre Square, a walk down Shop Street is a must. Onlookers are treated to entertainment from buskers as well as countless small cafes and shops, including the shop famous for Claddagh rings that promise love, loyalty and friendship. Not far from Spanish Arch is the impressive Galway Cathedral, which is home to interesting art and design. The Vagabond Adventure Tours inclusive of Galway include 7, 8, 11 and 12-day programs. On all its tours, the Vagabond staff will curate locally owned accommodations, pubs and restaurants that help serve their goal of authenticity. In the end the mission is to have guests “love Ireland as much as we do.” Transport is in a custom 4×4 Land Rover or Mercedes ‘Vagatron’ that allows access beyond where regular tour buses go. About Vagabond Small Group Tours of IrelandSince 2002 Vagabond Adventure Tours has been creating opportunities for visitors to embrace Ireland by walking, biking, horseback riding and kayaking its lands and waters, imbibing history and culture along the way. In 2013 the company was honored by National Geographic Traveler with a Top 50 Tour of a Lifetime distinction. In 2015 and 2017 Vagabond Small Group Tours of Ireland was named a “Best Adventure Experience” at the Irish Tourism Awards. And in 2016, Vagabond became Ireland’s first tour operator to achieve Ecotourism Gold Level Certification.  In 2013 the company launched Driftwood Journeys of Discovery that explores in a less strenuous manner many of the same routes of Vagabond Adventure Tours. Itineraries in both divisions focus on high yield, low impact tourism which means that local economies benefit from the company’s and guest’s contributions to local, rural Irish economies (including accommodations, meals, nightlife, attractions and shopping). For details on all of Vagabond Small-Group Tours of Ireland itineraries, availability and for 2018 reservations, please visit www.vagabondtours.com. Call toll free (from the US) 833-230-0288; in Ireland 00353 (0) 1 5634358; or email info@vagabond and info@driftwood.