Instapump Fury x Tom ($200): Bold and aggressive like the conniving feline, the Instapump Fury x Tom is designed with a cold grey upper and fleece material mimicking fur, with cartoon yellow hits throughout. Its fast design and THE PUMP technology are ideal for chasing down clever rodents. Also available in Versa Pump ($50) for toddlers.

The pack also features a robust and playful collection of unisex apparel for kids and adults, including a Reebok x Tom & Jerry padded woven jacket ($140), short-sleeve t-shirts ($28), a hooded dress ($60), crew neck sweaters ($55), and hoodies ($60). Each piece is inspired by Tom & Jerry cartoon colorways and the collection’s matching footwear styles.

KO Média is proud to announce that the January issue of ELLE Canadae stars none other than global phenomenon Beyoncé. As she unveils her new Adidas partnership for IVY PARK, Beyoncé offers a rare opportunity in this can’t-miss feature: full access. In an intimate DM session with her fans, the superstar opens up about motherhood, finding time for date nights and how she learned to feel “more womanly and secure” with her curves. “The more I mature, the more I understand my value,” she explains in the piece that hits newsstands in conjunction with ELLE US and UK. “I realized I had to take control of my work and my legacy because I wanted to be able to speak directly to my fans in an honest way.”

And for those looking for some guidance as we kick off a new decade, look no further than the whopping 30-page astrology guide in ELLE Canada’s January issue, which boasts ultra-entertaining year-ahead forecasts for every sign, an unmissable glossary of every celestial term you’ll need to know in 2020 and asks the important question: should you plan your next vacation based on your sign?

Also in this issue: Hollywood’s top stylist Karla Welch talks about the future of fashion, a report on the unlikely problem with clean beauty, a panel of Canada’s top fitness experts share the keys to successful goal setting, and an exclusive unforgettable shoot with Gucci’s one-of-a-kind eveningwear collection.

The January issue of ELLE Canada will hit stands today.

Reebok has unveiled details and photos of the DMX Trail Shadow OG, Trail and Future packs.

An electric mix of technical textures and bold prints, the silhouettes are the pinnacle of Reebok’s latest in contemporary offerings. Futuristic and fashion-forward yet familiar, its design marks the next chapter of Reebok design, where contemporary running and training meets high-end style.

The upper features a modern interpretation of Reebok’s premier running shoes, while the tooling provides a modern version of our iconic trail products. The DMX  Shadow packs introduce us to a new world order where functionality has become synonymous with fashion, and high-tech fabrics are king.

Product will be available on Reebok.com on a rolling basis from now until December 2019.

Josh Richardson of the Philadelphia 76ers was spotted arriving to tonight’s opening game against the Celtics, where he wore the Reebok Question Mid Double Cross in the tunnel.

Celebrating the release of the new Question Mid Double Cross sneaker, Reebok announced ‘Crossover U’ earlier this month, an all-day workshop series led by five contemporary creatives who draw inspiration from Allen Iverson’s impact on and off the court. Each workshop will explore Iverson’s influence on culture, style and creativity via experiential education. The ‘Crossover U’ workshops will take place this Friday, October 25 in New York City.

Nicky Jam always knew he wanted to do music, it’s something that came naturally to him, at just 12 years old, he was working at a supermarket and discovered this is what he enjoyed doing and it truly changed his life. “I got into music since the age of 12 years old, I was working at a supermarket and I would always be freestyling as I packed, one day a lady came in and spoke to my father and next thing I knew I was signed,” Jam said.

To preview the new sneaker, Reebok is releasing a short film today, entitled ‘ZIGNATURE.’ Built on the concepts that energy cannot be created or destroyed, only transferred, and that with every stride, every step forward, your energy grows, ‘ZIGNATURE’ takes viewers on a journey to redefine the idea of energy and what it means to have “your energy amplified.” On a wave of its own, Zig Kinetica Concept_Type 1, is energy return in shoe form.

Zig Kinetica Concept_Type 1 will be available on https://www.reebok.com/us/zig_home and select retailers on November 8 for $180.

About Zig Kinetica Concept_Type 1
As seen on the runways of Paris and New York Fashion Week with partners from Cottweiler to Chromat, the unique Zig sole embodies physical and creative energy. Now, with that same striking zig zag sole designed for energy return, and an upper expertly designed by Ian Paley, founder of Garbstore, Zig Kinetica Concept_Type 1 subverts the traditional spectrum of style that pits fashion and human performance at opposite ends. This silhouette shows what bold creative energy and inspiration can achieve, delivering an all-day performance experience with superior energy return and enhanced cushioning.

The three-part Zig energy system in the sole features:

Energy Web: A uniquely designed rubber web component, the Energy Web expands and contracts like a rubber band to provide spring like response, propelling you into your next movement

Microvent mesh on the shoe’s upper for breathability

The two brands unite to educate consumers on conscious consumption

Global sportswear brand Reebok and boundary-pushing designer XIMONLEE are bound by the belief that creating more sustainable offerings creates newness, with the shared goal being to awaken a consciousness in consumption within their consumer. XIMONLEE’s explorative yet commercial collections provide a unique vision on social topics, identities and philosophical quests brought to life through Reebok’s demonstrable footwear expertise.


The silhouette, as featured on the Shanghai Fashion Week runway, will be available for purchase in late 2020 through its official retail launch.


About Reebok
Reebok International Ltd., headquartered in Boston, MA, USA, is a leading worldwide designer, marketer and distributor of fitness and lifestyle footwear, apparel and equipment. An American-inspired global brand, Reebok is a pioneer in the sporting goods industry with a rich and storied fitness heritage. Reebok develops products, technologies and programming which enable movement and is committed to accompanying people on their journey to fulfill their potential. Reebok connects with the fitness consumer wherever they are and however they choose to stay fit – whether it’s functional training, running, combat training, walking, dance, yoga or aerobics. Reebok Classics leverages the brand’s fitness heritage and represents the roots of the brand in the sports lifestyle market. A subsidiary of adidas, Reebok is the exclusive outfitter of CrossFit and the CrossFit Games, the exclusive authentic global outfitter of UFC; the title sponsor of the Reebok Ragnar Relay series; and exclusive apparel provider for Les Mills. For more information, visit Reebok at www.reebok.com, or, for the latest news at http://news.reebok.com/

About XIMONLEE
Ximon Lee is a Chinese born Korean designer currently based in Berlin. Since graduating from Parsons as the Best Menswear Designer of the year, and later winning the H&M Design Award as the first ever menswear designer, he launched his eponymous brand XIMONLEE in 2015. Ximon is known for his meticulous and boundary-pushing work which explores topics ranging from gender, identity, society to ideologies and ethics. His vision is presented through thoughtfully treated garments, well studied silhouettes and innovative development of fabric, creating cutting-edge and inspirational collections every season that have garnered international appraisal. Ximon views each season as a study, posing questions towards specific issues and enable the clashing of ideas to prosper. In his garment making, he pushes and blends conflicting materials and collaging details to disjoint the standard idea of clothing. This is the signature visual methods the studio uses to reflect the contradictory identities Ximon views in contemporary society. Ximon was shortlisted as a LVMH Prize finalist in 2015 and later selected as Forbes 30 Under 30 in 2016.
www.ximonlee.com 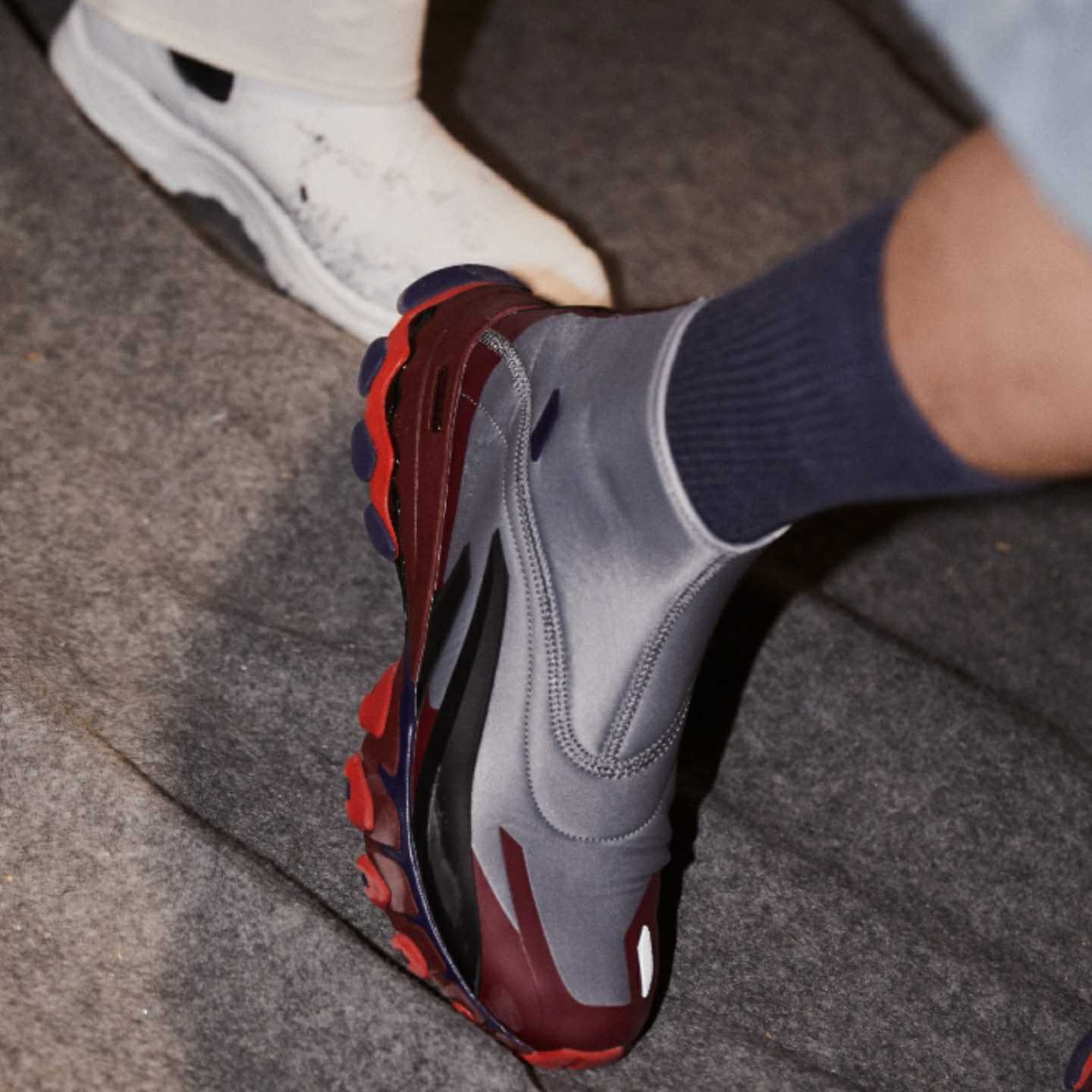 Designed to reflect our increasingly open and connected world, The Alter The Icons ‘Transparency’ collection brings truth to iconic silhouettes through experimentation with transparent materials that expose layers of classic design.

True to the theme of transparency, a custom ice rink took center stage at the event, surrounded by frozen sculptures and 360-degree video projections, bringing the essence of the collection to life. Star skaters from Harlem Youth Ice Hockey and Harlem Figure Skating surprised guests with on-ice performances.

The ‘Transparency’ collection features new takes on Reebok’s men’s, women’s, and kids’ Classic Leather, Workout Plus and Club C silhouettes, each of which are stripped down to their core and overlaid with transparent uppers. By rebuilding the classics and remixing them with transparent materials, the icon takes on a new dimension, uncovering a moment of truth through layers of detail. 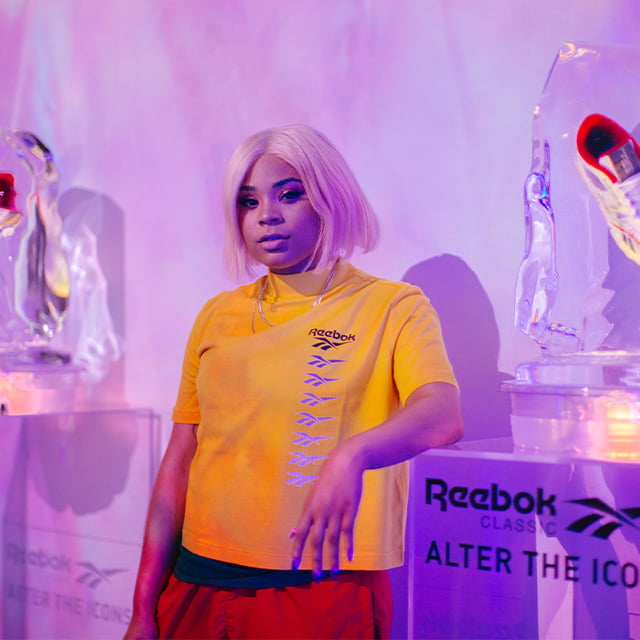 Forty years after Alien(1979) introduced Earth to the mother of all sci-fi nightmares, Reebok is rewinding the story back to the 1970s for an upgraded unisex prototype edition of the iconic ‘Alien Stomper’ sneaker boots. Originally appearing in Aliens (1986) as the signature ass-kicking footwear of franchise hero Ellen Ripley, the new 40 Anniversary Alien Stomper draws inspiration from the original Alien film to create the most series-authentic Alien Stomper yet.

The 40 Anniversary Alien Stomper is an upgraded take on the classic 1986 silhouette. The new edition now features premium-aged leather construction, a material innovation that enhances the sneaker’s tactile experience while also lending it a vintage “from the vaults” appearance.

Arriving in a cream-white colorway with contrasting blood-red and anthracite detailing, the unisex sneaker is oozing with minute design touches and Easter eggs for die-hard fans. Those details include references to a host of pre-production designs and logos that were never actually used in the film’s final production. making them true prototypes in both our universe and the universe of Alien.  For example, eagle-eyed fans will take special notice of an ultra-rare deviant version of the logo used by the Alienfranchise’s infamous “Weyland-Yutani” corporation, which drops the “D” to read just “Weylan-Yutani”.

The Stomper’s new packaging is just as lovingly detailed as the sneaker itself. Reebok spared little expense in researching and creating materials for the packaging, which will arrive with a swarm of Alien in–universe goodies to help maximize the immersion factor. The full loadout includes:

A certificate of authenticity, backed by the good name of the Weylan-Yutani corporation

Custom dust bags for protecting your stompers from hostile forces

The sneaker will arrive in a triangular prism-shaped “Space Fleet Box”, a retro-future design that imagines what a 22 century Reebok box would look like through the eyes of 1979-era sci-fi design.

The 40 Anniversary Alien Stomper is set for release on Alien Day, April 26, 2019. The unisex sneaker retails for $175 and will be available at www.Reebok.com/us/alien_stomper.