Lil Baby took to twitter today to reveal the cover art for his highly-anticipated upcoming album My Turn. A beautiful pastoral painting shows Lil Baby atop a cliff, with baby goats all around. He also announces he will be performing his hit single “Woah” on The Tonight Show with Jimmy Fallon this Monday, January 6.

Lil Baby has been a dominant force in hip-hop since his debut and 2019 was his biggest yet. Last month his largest hit to date “Drip Too Hard” with Gunna was nominated for a Grammy for Best Rap/Sung Performance, marking Baby’s first Grammy nomination. The song also started off the year as the first #1 at urban radio and was also the most played song of 2019 at urban.

He capped off the 2019 with another #1 song at urban with “Baby” by himself and DaBaby. Earlier this year Baby’s solo song “Close Friends” also hit yet another #1, showing his clear dominance throughout year.

Baby’s latest song “Woah” off his upcoming album sparked a viral dance craze on socials and hit #1 on Apple Music within 24 hours, clocking in at over 167 million streams to date and earning over 25 million per week. During its first week it also hit #1 on the Billboard Top 200 Song Consumption chart, and is currently the #1 Greatest Gainer at urban radio and also the #14 most played track.

All of these successes and more owe to Lil Baby’s incredible career and his 10+ billion global career streams, and Lil Baby is firmly established as one of the most dominant forces in rap.


Watch the video for “Woah.”

Watch “Woah” on The Tonight Show with Jimmy Fallon on NBC this Monday, January 6, 2020


In order to enter fans will need to follow campaign rules use official hashtags:

The school that receives the highest engagement on their video will receive a $25,000 donation total to the winning school’s music department/Band Program from Young Thug’s record label Young Stoner Life Records & Kevin Liles and 300 Entertainment.

Said Kevin Liles, Co-Founder and CEO of 300 Entertainment, “I come from an HBCU, I started out at the school of engineering at Morgan State University and there would be no me without my experience at MSU. Homecomings and the power of their marching bands have always been at the core of an HBCU’s school spirit. Our commitment from Young Thug and 300 is to support those very creatives who give their all and inspire us to build upon the HBCU communities. On behalf of Young Thug and I we will always commit to putting the arts at the front of our philanthropic efforts.”

Young Thug defies categorization and is a true iconoclast. Emerging on Atlanta’s hip hop scene with his 2011 mixtape series, he launched into the mainstream with his knack for melodicism and unique vocal style. Thug’s highly anticipated new album So Much Fun was released earlier this fall. Thug was awarded with a 2019 Grammy for his work and songwriting on Childish Gambino’s “This Is America” – named Song of the Year. He recently earned his highest chart placement on the Billboard Hot 100 with his latest single “The London” ft. J. Cole & Travis Scott and produced by T-Minus. “The London” also earned a spot on Spotify’s 2019 Summer Song Predictions list. Thug was recently featured on Ed Sheeran’s song “Feels” on Sheeran’s collaboration album, No.6 Collaborations Project, as well as Post Malone’s new single “Goodbyes” and on Lil Nas X’s new remix of “Old Town Road (Remix)”. In addition to his music, Young Thug recently launched his fashion brand SPIDER which premiered during Wireless week in London earlier this year. Young Thug is currently on ‘The Justin Bieber Big’ Tour across North America with chart-topping rapper Machine Gun Kelly. The tour kicked off Monday, September 30th, in Toronto, CA and wraps on November 18th in Los Angeles, CA. To check out tour dates click HERE.

Megan’s standout single “Cash Shit” feat. DaBaby, from her breakout 2019 project Fever (300) continues its hot streak, reigning at #1 at urban radio. Watch the “Hot Girl Fall” video, Megan’s performance medley of “Hot Girl Summer” feat. Ty Dolla$ign and “Cash Shit” feat DaBaby below and catch Megan on the remaining dates of the Legendary Nights Tour and on BET’s Hip-Hop Awards next month, where she is nominated for 5 awards!

On May 7th, 2019 multiplatinum Icelandic quintet Of Monsters and Men announced their new album FEVER DREAM to be released on July 26th.

Additionally, the band announced the album with a series of limited edition vinyl available on their online store. Fans can purchase the first edition at www.ofmonstersandmenofficialmerch.com

Released just last week, “Alligator” has turned heads with NME praising it as having a “bombastic and driving sound” and Line of Best Fit calling it “undeniably catchy.” In addition “Alligator” was the #1 greatest gainer in Alternative and #1 most added in Triple A Radio receiving strong support from those who have been waiting for the band’s return.

On “Alligator” co-vocalist Nanna Bryndis Hilmarsdóttir has taken center stage on the song not only as the lead vocalist but also wrote the track as well. On the empowering anthem and what is coming next for the band, they noted, “We are so excited about Alligator, the first release from our upcoming album. The song very much speaks to the excitement and energy that we feel about being back. We can’t wait to share more music and see everyone again.”
FEVER DREAM was co-produced by Rich Costey (MUSE, Vampire Weekend, Chvrches) and is the band’s third studio album.

OF MONSTERS AND MEN went from the talk of Iceland to the top of the global conversation on their 2011 debut, My Head Is An Animal. Not only did the record go platinum, but it also produced an international smash in the form of “Little Talks.” The breakthrough single earned a quintuple-platinum certification from the RIAA, made history as “the first song by an Icelandic band to cross 1 billion streams on Spotify,” and landed the band performance on Saturday Night Live. The group appeared on official soundtracks for franchises such asThe Hunger Games, The Walking Dead, and Beat Bugs, to name a few. In addition to performing at festivals such as Coachella, Lollapalooza, Firefly, and beyond, they supported Florence + the Machine on a high-profile arena tour. In the midst of this rapid rise, 2015’s Beneath The Skin bowed in the Top 3 of the Billboard Top 200 and the band starred in an episode of HBO’s Game of Thrones in the same year.

Finally, in celebration of the new music, the band has confirmed the television debut performance of “Alligator” on The Tonight Show With Jimmy Fallon on (NBC) on May 15th.

Watch Alessia Cara‘s heartfelt performance of “OUT OF LOVE” on The Tonight Show starring Jimmy Fallon. 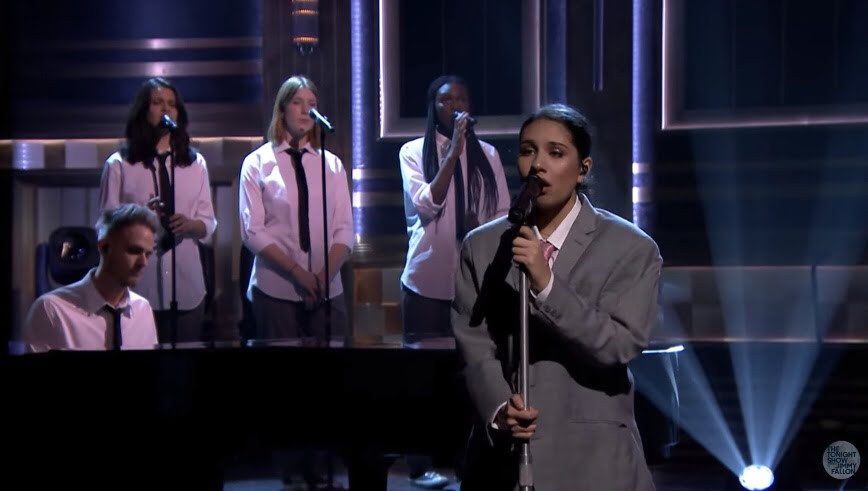 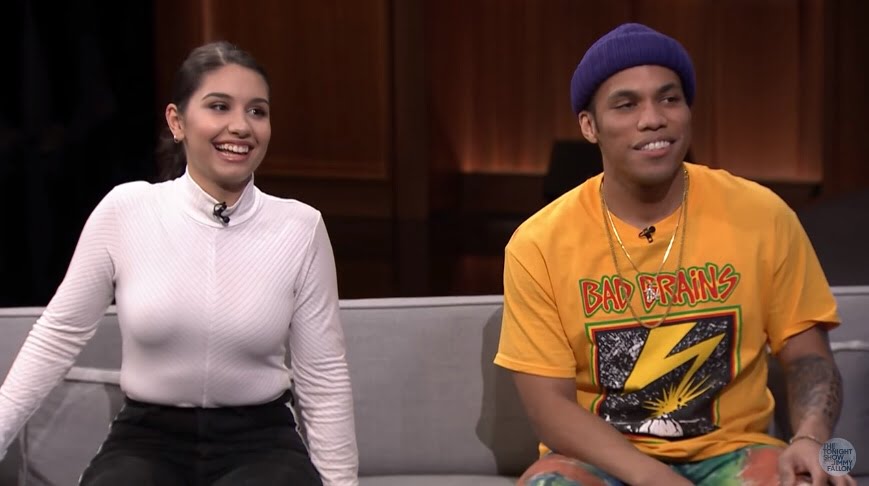 TUNE IN! ALESSIA CARA TO PERFORM “OUT OF LOVE” ON FALLON TONIGHT!

LISTEN TO THE PAINS OF GROWING HERE!

The “infectious hit”, according to Idolator, is making the climb up the Radio charts after being the most added song at Rhythmic Radio. “This specific record, I just wanted to come out with people actually vibing”, Dinah Jane explains. “I just wanted to take it to a party scene”. The feel-good vibe of the song is carried over into the video where the dance party heats up, indoors and outside.

Dinah Jane recently performed the track on The Tonight Show Starring Jimmy Fallon and Rolling Stone noted, “Jane transformed the Tonight Show stage into a neon-lit club for her performance of the mid-tempo pop track, which includes a sly reference to Fifth Harmony’s massive hit, ‘Work From Home.’ Forbes chimed in and wrote, “’Bottled Up,’ is an infectious dance-pop jam that is sure to make Fifth Harmony fans happy… though it takes the sound to the next level…”

In recent months, in addition to logging many studio hours, Dinah Jane also shot a small role for the Netflix film, ‘The After Party’. And now, with this debut release, listeners everywhere will get to know Dinah Jane like never before as she unveils more music in 2018.

Grammy Award winning singer/songwriter Alessia Cara has once again donned the symbolic, oversized suit she wore in the “Growing Pains” video, the “Trust My Lonely” video, as well as recent appearances on Fallon, Colbert, and the Today Show for her performances at Austin City Limits and the MTV EMA Awards – where she took home the award for Best World Stage. Alessia told the Today crew: “It’s an artistic way of symbolizing the idea of growing up. Sometimes you kind of feel like you’re drowning and you feel like you’re not ready for the roles life throws at you so this was my way of symbolizing it in an artistic way.” Alessia took to her Twitter account to defend her choices for wearing the oversized suit after some online criticism and received support from Kehlani and Ariana Grande.

Jim James stopped by the Tonight Show’s backstage music room to perform a cover of Sly and the Family Stone’s “Everyday People” for a new installment of the Emmy nominated “Cover Room” series. “Cover Room” is a digital-only music series featuring artists performing covers of some of the most popular songs. It is shot in the same location each episode to illustrate how one space can be transformed to create a new, one-of-a-kind experience.