ON HI OR HEY/CAPITOL RECORDS

their critically acclaimed 2017 debut album From the Outside.

Hey Violet release a new single “Better By Myself” today on Hi or Hey/Capitol Records and available for streaming and purchase from all digital partners. In addition, an official video for the song, directed by Marcella Cytrynowicz, debuts today. Watch it HERE. “Better By Myself” which was co-written by Hey Violet, Gabe Simon, and producer Daniel Nigro, is the first of four new tracks the band is set to release throughout the Spring and Summer.

“Better By Myself” captures the duality inherent in feeling invincible in solitude because you don’t need anyone, but recognizing that perhaps being totally alone isn’t necessarily the best path forward. “It’s about being in an unhealthy relationship and having the courage to leave, but realizing maybe you’re isolating a little much,” says Hey Violet frontwoman Rena Lovelis. “I think we need to fall in love with ourselves before we fall in love with anybody else and that’s why the song sounds so celebratory. It’s about finding that happy medium between I don’t need anyone, which tends to be a defense mechanism, and being truly okay with yourself.”

Hey Violet’s 2017 debut album From the Outside featured the singles “Guys My Age,” which has amassed over 230 million global streams, “Break My Heart,” and “Hoodie,” which is approaching 200 million streams. The album racked up critical praise, including accolades from The New York Times, which called it “one of this year’s best and most provocative pop albums.” Stereogum noted that it “has plenty of attitude thanks to Lovelis’ vocal and lyrical presence,” and NYLON declared, “I challenge you to find a debut album as explosive and technicolored as Hey Violet’s From The Outside (the album) pulses with cheeky hooks and middle fingers to the status quo. Lead singer Rena Lovelis’ voice is arena-shaking. You’re in for one hell of a ride.”

Over the past few years, Hey Violet, which is Rena Lovelis, her sister Nia Lovelis (drums), Casey Moreta (lead guitar) and Iain Shipp (bass) have steadily built an engaged fanbase with their powerful, immaculately crafted alt-pop songs. “Guys My Age” was named one of the Best Songs of 2016 by The New York Times, who called it “teen-pop’s revenge: an urgent dark song about sexual rebellion” and one of the 20 Best Songs of 2016 by V Magazine. In 2017, Hey Violet was also nominated for an iHeart Radio award for Best Underground Alternative Band, dubbed an “Artist Primed For A Breakout” by Billboard, and named “Artist To Watch” by The Guardian, PopCrush, and more. The band has racked over half a billion streams worldwide, sold out their North American headline tour and performed on both The Late Late Show With James Corden and Late Night With Seth Meyers.

Hey Violet will perform several upcoming shows to celebrate the release of their new music.

All dates are below. Tickets go on sale today here.

For more on Hey Violet

“Hey Violet’s ‘From the Outside,’ (is) one of this year’s best and most provocative pop albums.” – The New York Times

Hey Violet premiere the video for their new single “Hoodie” today- watch it HERE. Directed by Jessie Hill, (Chris Cornell, Broods, Zella Day) the video was filmed in Los Angeles. “This is video is visually completely different from our other music videos so far,” says front woman Rena Lovelis. “We wanted to give it an air of indie movie vibes and used projections to symbolize the memories and show the loneliness conveyed through the lyrics.”

The band’s debut album From The Outside is out now on Hi or Hey Records/Capitol/Caroline- the album hit #1 on the iTunes Pop Chart and is available via all digital retailers. The band co-wrote songs on the album which was produced by Julian Bunetta. The New York Times declares it’s “one of this year’s best and most provocative pop albums,” and Stereogum says, “Hey Violet have a very strong album to show for their efforts – one that, like its provocative lead single, (‘Guys My Age,’) stakes out its territory and demands a reaction,”while Nylon raves, “I challenge you to find a debut album as explosive and technicolored as ‘From The Outside.’ With ’80s-tinged synths and enough sub bass to scratch the little EDM itch we all have, (the album) pulses with cheeky hooks and middle fingers to the status quo. Lead singer Rena Lovelis’ voice is arena-shaking. You’re in for one hell of a ride.” Hey Violet is also nominated for a 2017 Teen Choice Award for Choice Song: Group for “Guys My Age” and will headline Teen Fest 2017 at Teen Choice 2017 LIVE Sunday, Aug. 13 (8:00-10:00 PM ET/live PT tape-delayed) from University of Southern California’s Galen Center on FOX.

In the past year, the L.A.-based five-piece have proven the power of their immaculately crafted alt-pop. Their recent track “Break My Heart,” has racked up almost 10 million combined streams. Idolator says “Break My Heart” is a “monstrous electro-anthem” and declares, the band is “destined to have a massive year,” and Alternative Press calls the track “irresistible.” The song is the follow-up to Hey Violet’s smash single”Guys My Age,” which has more than 46 million combined streams, while the video is approaching over 16 million views. The band recently wrapped up a sold out North American headline tour, graced the March cover of Alternative Press, and performed “Guys My Age” on both The Late Late Show With James Corden and Late Night With Seth Meyers. Hey Violet’s Brand New Moves EP debuted as the #1 album on iTunes in the U.S., and U.K. The Los Angeles Times compared their move “from grimy punk to shiny pop” to the Go-Go’s, while Galore declared front woman Rena Lovelis, “emits an unheard of level of rock-stardom for such a small girl without even singing a single note. But when she does sing, it’s as if Courtney Love, Gwen Stefani, and Hayley Williams crashed into each other and made a whole new generation of rock star.” Hey Violet is Rena Lovelis,her sister Nia Lovelis (drums), Miranda Miller (keys, vocals), Casey Moreta (lead guitar) and Iain Shipp (bass).

For more on Hey Violet: 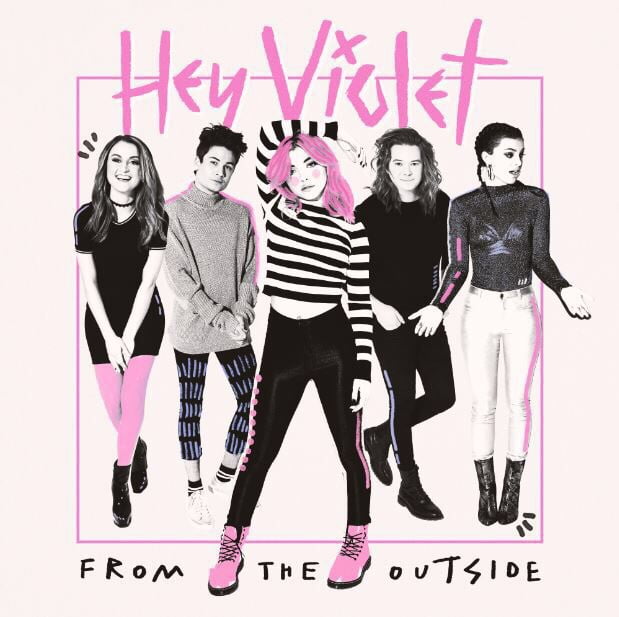