Additionally, “Daddy” was #1 Most Added at Urban Radio,” with a total to 108 stations playing the single it has garnered a Radio Audience of 3.6 million at Rhythm and Urban stations across North America.

Beyond these blockbuster anthems, Dirt Bag kicks off with the bold, blistering, and braggadocious title track “Dirt Bag” where Blueface proudly embraces his role as rap’s rawest and realest anti-hero.

“Bussin” featuring Lil Pump brings two of the game’s loudest mavericks together for an irresistible singalong and “Gang” featuring Mozzy might just be the ultimate West Coast banger.

Standing over six feet three inches tall and sporting a tattoo of Benjamin Franklin on the corner of his countenance, it would be hard to miss Blueface in absolutely any crowd. However, after exploding with smashes such as “Dead Locs” and the multi-platinum “Thotiana,” he is literally everywhere and taking over hip-hop. Within a year, he went from ditching a college football career to clocking well over a billion streams.

LISTEN TO CONFESSIONS OF A DANGEROUS MIND HERE

‘TRUNK MUZIK 3’ BY YELAWOLF OUT TODAY

Hailed by HotNewHipHop as “one of the quickest, most lyrically dexterous spitters currently operating in the rap game,” Yelawolf brings his gritty authenticity and underground sensibilities to each track on Trunk Muzik 3. The album follows 2017’s Trial by Fire (a self-produced effort featuring appearances from Juicy J, Travis Barker, Kid Rock, and Wynonna Judd) and Love Story (a 2015 release recently certified gold by the Recording Industry Association of America).

In addition to delivering Trunk Muzik 3, Yelawolf recently announced the launch of Creek Water — a boutique whiskey brand presented by his imprint Slumerican and produced by Next Century Spirits. With the brand named for his independently released 2005 debut album, Yelawolf maintains full control of Creek Water’s packaging, branding, and marketing.

Beginning April 17th, Yelawolf will embark on a run of Canadian shows that begin in Kelowna, BC and ending April 25th in Winnipeg. See below for a full set of dates. 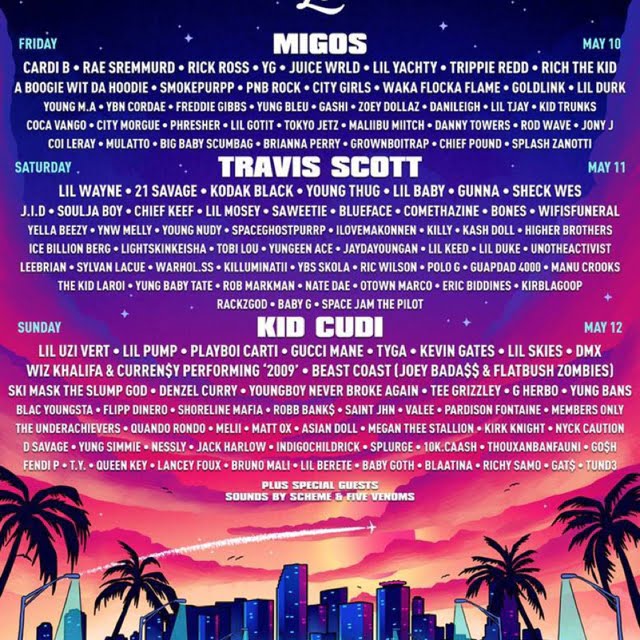 “Rolling Loud was all just a dream, the fans made it into a reality. Thank you so much for all the support and helping create a brand that will live on forever. Can’t wait to show you what we have in store for you on site this year in Miami” said co-founder Matt Zingler.Co-founder Tariq Cherif stated, “After a year of touring the festival around the country and world, we are excited to return home to Miami to produce what will be our biggest and best show to date.”

Rolling Loud was launched by co-founders, Matthew Zingler and Tariq Cherif five years ago in Miami, Florida. Rolling Loud is the World’s Largest Hip-Hop Festival and is one of the premier destinations for hip-hop and music fans in the United States and abroad. Since organizing its inaugural event as a single-day festival in 2015, Rolling Loud has expanded into an annual world-class festival in Miami (2015), as well as culturally rich countries and cities, both domestically and abroad, including Oakland, California (2017), Los Angeles, California (2017), and Sydney, Australia (2018). In 2018, Rolling Loud’s flagship event, Rolling Loud Miami, hosted 180,000 attendees over three days with more than 120 artists performing on three stages. Celebrating its fifth anniversary in 2019, Rolling Loud Miami will, as always, feature the biggest names and up-and-coming superstars fans have come to expect, with an extraordinary and diverse array of hiphop artists performing across the three-day event. Rolling Loud will continue its worldwide expansion in 2019 with new locations to be announced later this year.

Matthew Zingler and Tariq Cherif are the co-founders of Rolling Loud and have been booking premier hip-hop shows throughout the State of Florida since 2010 and have been featured in Billboard Magazine’s annual list of the Who’s Who in Hip-Hop, Hip-Hop Power Players Edition consecutively since the inaugural list in 2017.

A nocturnal triptych of neon electronics, woozy hip-hop, and impressively deft rapping, the record showcases every side of two-piece–Derek Wise and 88 Camino. Its forward-thinking futurism positions the group for a major mainstream breakthrough. Just last week, they teased the forthcoming arrival of 88GLAM2 with the release of the single “Lil Boat.” Within a week, it cracked 500K Spotify streams and attracted praise from Complex, HotNewHipHop, and more.

From the hypnotic crunch of “Purple Baguettes” through the smoked-out finale “Endz,” the album dips in and out of a myriad of sonic styles and worlds, bringing its own vibrant vision to life in the process.

Pop phenomena, Tiffany Young, announces her eight-date 2019 “Lips On Lips” North American Mini Showcase Tour. Kicking off on March 3rd 2019 in Toronto, the tour will weave through New York, Chicago, Minneapolis, Seattle, Vancouver; ending in her home state of California with San Francisco and Los Angeles. Tickets will be available for Local On-Sale this Thursday November 15th at 10:00AM Pacific; and General On-Sale the following day, Friday November 16th at 10:0AM Pacific.

Kicking off March 3, 2019; Tiffany will be bringing her charismatic performances and smooth vocals to the states where she will be performing her highly talked about singles “Teach You” and “Over My Skin.” Fans can expect an EP to drop early next year, along with many more surprises in store. Cosmopolitan describes her sound as “catchy choruses, an irresistible dance-ready beat laid with synths that sound futuristic and vintage at the same time, every lyric oozing with feeling, and of course fun theatrics. But instead of singing demurely about general cutesy crushes and falling in love, Young’s busting out her big girl chops for more personal yet relatable, story-driven tunes.” Meet Tiffany Young, the K-Pop Megastar You’re About to See (and Hear) *Everywhere* – Cosmo

In the midst of her U.S. takeover, Tiffany spoke to PAPER Magazine about representation and her newly discovered freedom of expression, stating; “We are in this amazing time where there are no limits […] It’s all about diversity, being opinionated and having something to say.” Tiffany was photographed for PAPER Magazine’s new digital cover series Takeover, where they chose five of their favorite women who’re making a significant impact on the music industry right now. “Tiffany Young, the breakout singer of K-pop group Girls Generation, is carving out a major name for herself stateside.” Also photographed for the series: Normani, Charli XCX, Teddy Geiger, and Kelelam.

Hermosa Beach is re-creating the movie magic on its iconic pier by temporarily installing and lighting the 12 vintage-style street lamps that illuminated La La Land actor Ryan Gosling’s sunset stroll on the pier in the movie. The Lighthouse Cafe, a Hermosa Beach nightclub that served as the scene for jazz performances in the movie, is providing jazz musicians to perform on the pier for the lamp lighting nightly on Oct. 24, 25 and 26.
The Lighthouse Cafe is considered the epicenter of the West Coast jazz movement, hosting performances by many of the legendary jazz greats, including Miles Davis, Charlie Parker and Chet Baker.
The lighting ceremonies and nightly jazz performances are previews for La La Land Day at the Beach on Oct. 27, when the City and Kinecta Federal Credit Union will host a celebration of the Academy Award winning movie and the City’s connections to jazz history. La La Land Day at the Beach will feature performances by the Lou Giovanetti Jazz Orchestra and professional dancers from 5-7 p.m. Friends of the Parks will then provide a free screening of the award-winning movie on a beachfront screen at 7:30 p.m.
Atlanta’s superstar, Grammy-Nominated trio Migos took home the trophy for Favorite Pop/Rock Group at the American Music Awards last night. The big win comes amid the colossal year they have had with the release of their second consecutive album on Billboard’s Top 200 Chart, CULTURE II (Quality Control Music Motown Records Capitol).
Quavo has also just shared a new futuristic video for “Bubblegum” directed by himself and Daps ahead of the release of his debut album Q U A V O H U N C H O this coming Friday via Quality Control Music Motown Records Capitol. Watch the video HERE. The video comes on the heels of his show-stopping performance on The Tonight Show Starring Jimmy Fallon last week here performing the previously released tracks from the album “Lambtalk” and “Workin Me”. Additionally DJ Khaled just announced he will be premiering Q U A V O H U N C H O album on his new Beats radio show on Thursday night. Check out the new video for “Bubble Gum” below, share and stay tuned for the new album Friday.

“Cowboy” is her most personal song to date. As ALMA describes: “When I first left my home town to write in LA I felt scared and small – like the world was way too big and for me…it took me a long time to work out who I was and what I wanted to say. I was afraid to give away anything personal at first (us Finnish people are naturally very reserved) so it took a long time for me to understand my true identity and start getting it into my songs. So it helped to create an alter ego – to be a Cowboy.”

Following her critically acclaimed EP “Dye My Hair”, smash singles “Chasing Highs” & “Phases” FT French Montana (including an exclusive Charli XCX directed video) and her 2018 mixtape “Heavy Rules”; ALMA has garnered over 350 million combined Spotify plays and topped iTunes charts around the world. Undeniably one to watch, ALMA recently landed on the prestigious BBC Music Sound of 2018, received the award for “Best Finnish Act” at the MTV EMA awards, and was named an “Artist To Watch” by VEVO DSCVR. Momentum continues to build as she leads the charge of a new generation of fierce, female pop geniuses who are swiftly taking over the industry.

“I am an ambitious person,” ALMA admits. “But I want to live in the moment, I’m not thinking about tomorrow, about big arena concerts, or flash awards. I want to keep writing, performing and working with people I like and see where it takes me.”

Despite her openness to whatever the future may bring, ALMA’s sense of self is steadfast. She recognizes that today’s pop stars “are like gods” to their young fans. “They need to understand they’re powerful people who really can change things,” she says. “I just want to be here and be real. “Cowboy” is the first real piece of me I wanted to give away. There’s lots more to come. I don’t want to bullshit anyone or write empty pop bangers.”

360 Magazine joined Hollywood’s very own Lure Nightclub for LIT Saturdays at their most recent event with Hip-Hop’s number one radio station, Power 106. DJ Inferno and Krucial hosted the magical evening with mixes of top Hip-Hop, R&B and EDM hits. Lure (owned by parent company – Sunset Entertainment Group) has featured celebrities such as Jay-Z, Future and Drake as hosts for this prime venue, located at 1439 Ivar Ave, Los Angeles, CA 90028.

Lure exhibits high-tech entertainment with a massive stage, motion-sensitive LED screens, and numerous LED lights. Mirrors and booths outline the perimeter which define a Vegas-style appeal and transforms Lure into a major hotspot of Los Angeles. The 18,000 sq. ft. dance club includes indoor and outdoor party areas, intimate lounges, bottle service and hand-crafted cocktails.  A strict dress code is applied to both men and women as multiple guests were seen arriving in classy chic or formal wardrobe. LIT Saturdays reflected a diverse crowd of multiple races while ages ranged from twenty-four to thirty-two.

A VIP line is also offered for special guests and bottle service holders. Doors open at 10:30 p.m. Pre-sale tickets guarantee entry before 11:30 p.m., while non-ticket holders may enter after 11:30 p.m. if the venue is not at capacity. Lure operates weekly on Friday and Saturday.

The 360 team ended the night with a feeling of success thanks to Lure’s refreshing ambiance and crowd. The venue’s balance between lounge and dance makes for an exceptional Hollywood outing.