Q&A with Author Weiqi Wang on:

Question: How would you define this genre that you invented for Code of Rainbow and why is it important to differentiate this from your typical sci-fi series?

Weiqi Wang: This series is a pioneer to construct a magic world based on physical scientific theories. I call this potential new genre Sci-M-Fi, or SMF. This is the first attempt that I ever heard of, worldwide, that tries to bridge magic with realistic, physical science. My scientific background and understanding in scientific disciplines, including but not limited to the theory of time and space, origination of the universe and quantum physics are the keys to my world-building in this series. By the end of the series, readers will see how the magic in this world, although looking very similar to “traditional” magic concepts, can be explained by the underlying physical scientific theories from our real world. As such, this series will smoothly transform its genre from magic fantasy to sci-fi. That’s why I call it Sci-M-Fi.

Q: Did your scientific and philosophy background play a role in creating Sci-M-Fi?

WW: I’m a scientist and an engineer, plus I’d like to see myself as a philosopher, too. I couldn’t stop thinking about extreme philosophical questions since I was little, such as how the universe exists. So, my style is open-minded and borderless imagination, plus humor when it fits, and I’m brave enough to try to bridge magic with physical science. If we think about it, the concept of “magic” originated from the observation of something that we cannot explain, something deemed supernatural, which does not mean it’s not scientific. If I wasn’t a scientist and hadn’t been thinking critically about philosophical questions such as the origin of the universe, I wouldn’t be able to build the world in this series.

Q: Another big theme present throughout the series is the mistreatment of animals, or “magimals”. Why was this an important issue for you to highlight?

WW: Not everybody knows the epidemic of abuse and torture to animals, whether it’s for fun or for business. The fur coat business, as a typical example, sometimes demands live skin peeling to get fresh furs so that the coats can be sold at a higher price. Countless animals therefore suffered un-imaginable, appalling pain from live skin peeling, and I’ve seen many videos on that. It just drove me utterly mad, but it seems to me that very few people are aware of this and, surprisingly, many don’t care even after getting informed. It’s just so wrong. I want to raise awareness on that.

Q: What message do you hope to get across by showcasing these issues?

I want my readers, especially the younger ones, to be aware of this kind of issues and get educated in the right direction. Animals and humans are both lives. Treating them with love is one of the most basic and fundamental disciplines and deeds of goodness. We also need to protect environment and treasure all kinds of resources. Appreciate and maintain the era of peace as of now. This world doesn’t owe us peace; we need to maintain it by ourselves.

Q: So, do you think real magic is out there?

WW: I think people should be open-minded and embrace creative thinking when it comes to the concept of “magic.” It originates from describing un-explainable phenomena, which might be due to under-development of science. Magic and science may not be opposite to each other, they are just two concepts or philosophies. So, I would say to readers to try to be open about the idea of magic. Anything is possible.

WEIQI WANG’s goal as a writer is to connect the scientific world with elements of magic. He received his PhD from Oxford University before coming to live in the United States. As a Doctor of Philosophy, Wang also explores elements of existence and universe came to be in his books. Legends of Azure and the Masked Planet is the third book of the Code of Rainbow saga, with four more installments of the series planned. He currently resides in San Francisco. Learn more about Wang and the Code of Rainbow series on his website, and connect with him on Facebook, Instagram, and Goodreads.

Code of Rainbow: Legends of the Azure and the Masked Planet is available now on Amazon.

After their scene-stealing theatrical debut in Marvel Studios’ Black Panther, Wakanda’s fiercest warriors are traveling outside of their country to fight new threats and new troubles, in an all-new story by award-winning science-fiction and fantasy author Nnedi Okorafor.

A Hugo and Nebula Award winner whose best-selling books include the Binti trilogy, Who Fears Death and Akaka Witch, Nnedi first brought her storytelling to Marvel in the digital comic series Black Panther: Long Live The King and in the Vernomverse anthology story “Blessing In Disguise.” With art by Alberto Jimenez Alqurquerque (Jean Grey), WAKANDA FOREVER: AMAZING SPIDER-MAN #1 brings the Dora Milaje out of their vibranium city and into New York in the first of a three-part story when a Wakandan threat falls upon Manhattan – and they meet webslinger Peter Parker! The Dora Milaje’s adventures continue in WAKANDA FOREVER: X-MEN and WAKANDA FOREVER: AVENGERS in July and August.

“I’m super excited about writing this storyline. Powerful disciplined African women with futuristic spears who faced their shortcomings and changed a nation? Oh heck yeah, I’m so there,” shared Okorafor. “Fans of the Dora Milaje can look forward to seeing them out in the world beyond T’Challa and the Wakandan throne’s shadow. They’ll get to see the Dora Milaje come into their own, while teaming up with the unexpected.”

“As millions of moviegoers now know (and as comic readers already knew!), the Dora Milaje are the absolute coolest. And the rest of the Marvel Universe is about to learn this too when Okoye, Ayo and Aneka leave Wakanda on an adventure that will see them team up with Spider-Man, the X-Men and the Avengers,” teased series editor Wil Moss. “Nnedi Okorafor and a talented team of artists will be telling one Dora Milaje story that runs through these three separate WAKANDA FOREVER one-shots. We’re lucky to have Nnedi on board for this — she’s an incredible novelist, and her recent BLACK PANTHER: LONG LIVE THE KING digital series proved that she’s a great comic book writer too. She’s come up with a crazy-tough problem for the Dora Milaje to solve — but if anyone can, it’s these crazy-tough women.”

Join the fearless trio of Okoye, Ayo and Aneka in all-new stories as they travel the globe to protect the country – for Wakanda!

Genre-bending internet phenomenon unveils his latest offering jump – out now via Cloudkid. Get it here.  Recruiting LA artist Sofi de la Torre’s scintillating vocals we’re engaged in a new and unseen side to Gabriel’s songwriting. It’s a dark and twisted love fantasy written with the kind of affection and sincerity that’s endeared him to his legion of fans. Matching 90’s emo with hip-hop and rock, Gabriel refuses conventional themes very much forging his own path through the haphazard song writing world.

Marvel and Stitcher release trailer for ‘Wolverine: The Long Night’

The “Wolverine: The Long Night” story is a captivating hybrid of mystery and the larger-scale fantasy of the Marvel Universe. It follows agents Sally Pierce (Celia Keenan-Bolger) and Tad Marshall (Ato Essandoh) as they arrive in the fictional town of Burns, Alaska, to investigate a series of murders and quickly discover the town lives in fear of a serial killer. The agents team up with deputy Bobby Reid (Andrew Keenan-Bolger) to investigate their main suspect, Logan (Richard Armitage). Their search leads them on a fox hunt through the mysterious and corrupt town.

Stitcher and Marvel have assembled a writing and production team of veterans from both the comic book world and the podcasting industry. “Wolverine: The Long Night” is written by award-winning comic book author Ben Percy (“The Wilding,” “Red Moon”) and directed by Brendan Baker (formerly a producer for Radiotopia’s “Love & Radio”). Chloe Prasinos (formerly a producer for Gimlet’s “Reply All”) oversees sound design. The series is produced by Daniel Fink of Marvel and Jenny Radelet of Stitcher.

Marvel Entertainment, LLC, a wholly-owned subsidiary of The Walt Disney Company, is one of the world’s most prominent character-based entertainment companies, built on a proven library of more than 8,000 characters featured in a variety of media over seventy-five years. Marvel utilizes its character franchises in entertainment, licensing and publishing.

Stitcher is one of the world’s most popular podcast listening services, with a growing network of original content and a premium subscription service. Stitcher is part of Midroll Media, a leading podcast company that is also home to the Earwolf network and its top-ranked comedy podcasts and the Midroll advertising network, representing over 300 of the world’s largest podcasts. With offices in Los Angeles, New York City and San Francisco, Midroll was founded in 2010 and is a wholly owned subsidiary of The E.W. Scripps Company (NYSE: SSP).

From the creators of Spider-Gwen, SOUTHERN BASTARDS, DRIFTER, and AIRBOY, comes a new fantasy where heroes are hard to find.

Zelda’s about to start a war of dreams. In the days when story and reality were one, the old blood—people with the power to shape stories—built a new world to escape the future we all came to live in. Generations later, Zelda rejects the old blood’s dreams and escapes into our world to run from destiny. But destiny has a nasty way of catching up to you.

BLACK CLOUD, VOLUME 1: NO EXIT is available for preorder via Amazon, Barnes & Noble, Indiebound, and Indigo.

“Making your dreams real is never easy, but with splashy art and spiky writing, BLACK CLOUD reminds us of the beauty and power of imagination in dark times.”
—Cliff Chiang (PAPER GIRLS, Wonder Woman)

“Like Grant Morrison’s trippiest work, BLACK CLOUD will make you look at life in a new way, and wonder what stories are hiding in that stranger you keep ignoring—not to mention yourself.” —Paste Magazine

“BLACK CLOUD establishes worlds and characters that are nothing less than witty and captivating: a testament to some of the strongest imaginations in the industry.” —Comics Verse

“As intricately crafted as it is downright wild.” —IGN

“BLACK CLOUD gives storytellers back their power in our modern world. Not to be missed.” —Alison Haislip (G4, The Voice) 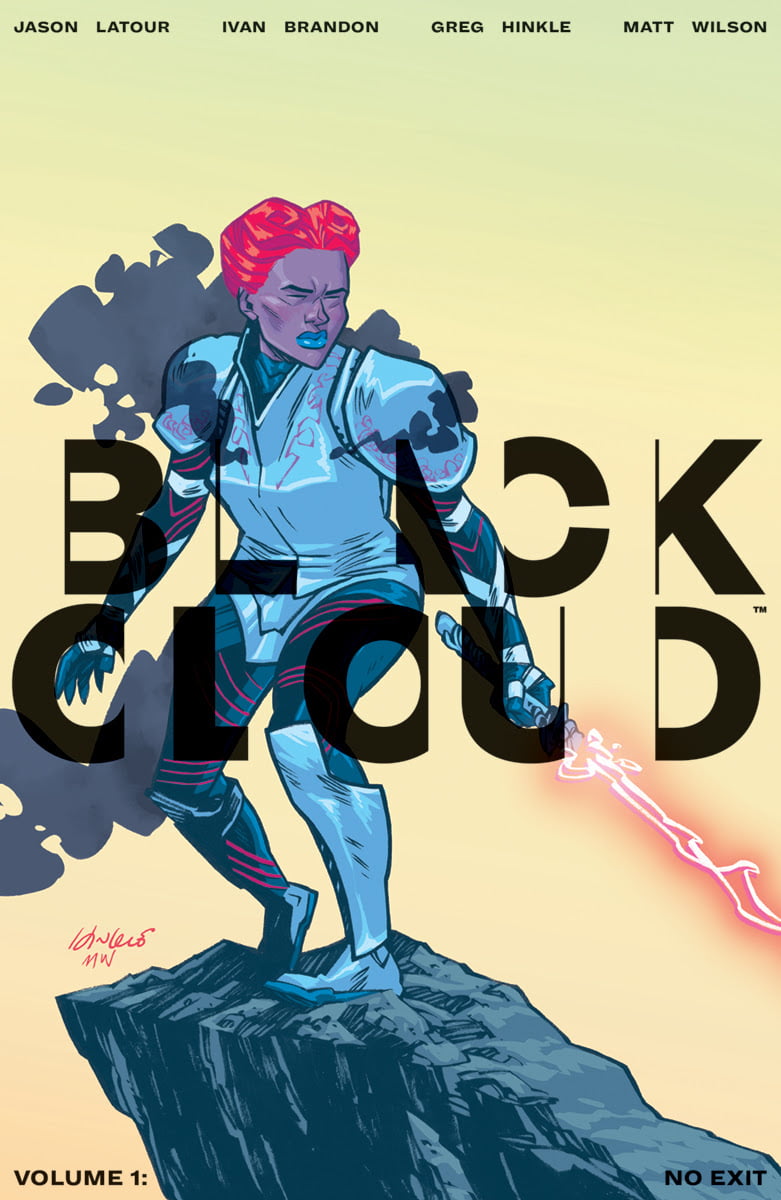