DEBUT ALBUM ‘THIS TIME’ OUT NOW

Following a whirlwind 2018, rising American singer-songwriter and musician Donna Missal dives head first into 2019, making her late night television debut on NBC’s Late Night With Seth Meyers with what’s certain to be a riveting performance of her breakthrough single, “Keep Lying.” Tune in to NBC tonight at 12:35/11:35 central.

Donna recently explained the concept of the tour in an Instagram post: “I was homeschooled. I never had a school dance or a picture day or a graduation. THIS TIME TOUR is your invitation to the winter and spring formal I never had. If you had a shitty time in school and want a re-do, or maybe you loved it and want to go back to that feeling, THIS TIME is your time. VIP packages will be available so you can take your very own NEW yearbook photo by Muriel Knudson and be a part of our CLASS OF ‘THIS TIME’ yearbook.”

In addition to her North American headline tour, Donna will bring her live show to the UK for the first time, making her London debut January 23 at The Moth Club. For tickets and more information, go to http://www.donnamissal.com.

Having spent much of 2018 on the road, including two special album release shows in LA and New York, an appearance on MTV’s TRL, her debut festival appearance at Austin City Limits and prominent supporting slots opening for King Princess, Bishop Briggs and Sir Sly and Joywave, earning legions of new fans along the way—now Donna Missal is taking the reins, bringing her energetic and fiercely passionate live set to a city near you, in support of her debut album (and tour namesake), This Time.

The tour will see Donna Missal playing songs from her debut album, This Time, out now on Harvest Records. The eleven-track album infuses Missal’s timeless, fiery vocals with scorching production by Tim Anderson (Solange, BANKS, Halsey), harkening back to the heyday of classic soul music, all the while creating something fresh and contemporary. Including standout cuts like “Driving,” “Transformer,” “Girl,” “Thrills” and current focus track, “Jupiter,” an impassioned anthem with a driving bassline and massive chorus. Watch Donna deliver the goods in this live version of “Jupiter” HERE, filmed exclusively as part of Vevo’s DSCVR series

The album also includes her latest single “Keep Lying,” which has been steadily climbing the charts at Alternative radio. Following Zane Lowe’s premiere of Missal’s original demo version of “Keep Lying” on Beats 1, the song shot to the top of the Spotify Viral and HypeMachine charts.

Blending elements of soul, hip-hop and rock & roll, Missal shaped This Time’s sonic landscape partly by laying live recordings down on tape, then sampling those recordings to imbue her songs with a fresh yet timeless energy. Much of that live recording took place at the iconic Different Fur Studios in San Francisco, where she was joined in the studio by Nate Mercereau (Leon Bridges). “I really wanted this album to reference my history of playing in bands,” she  explains. “It’s all these very pure, talented musicians playing together in a room, but then we took that and sampled it and altered in a way that creates something totally new.”

With its title taken from a track Missal co-wrote with her frequent collaborator Sharon Van Etten, ‘This Time’ is an uncompromisingly honest look at living entirely on your own terms. “I’ve spent most of my life being hyper-focused on time, which I think is something that a lot of women obsess over,”says Missal. “We’re in such a rush to make things happen, when really we should take the time to figure out what we actually want out of life. And even though it’s so fucking hard to have that kind of patience, I think it’s so important to believe in yourself enough to let things develop in a way that feels right to you.”

Throughout the album, Missal crafts her lyrics with the kind of idiosyncratic detail that instantly etches each line onto your heart, exploring self-empowerment on tracks like “Transformer”—a fiercely charged anthem about “having the courage to take what you want from life, without apology,”and on “Thrills,” which sees Missal musing on self-love and sexual confidence, her voice soaring over a gently swaying groove and dreamy guitar tones. “‘Thrills’ is about owning what makes you real,” says Missal. “There is a shift happening in our societal standards of beauty and sexuality, and the more we embrace our flaws the closer we become to effecting real change. I’d love for people to hear the song — and not just women, but anyone who feels disenfranchised— and remember that being sexy and confident comes from self-acceptance.”

Elsewhere on This Time, Missal infuses social commentary into songs like “Girl”: a stripped-back yet intricately textured track that unfolds with both gentle playfulness and piercing vulnerability. “I wanted to address this idea that women need to be pinned against each other in order to succeed, or need to point out the flaws in other women just to feel good about themselves,”says Missal. “That kind of thinking has been around forever, and it doesn’t feel like it’s going away—but the more we talk about it, the better it’s going to get.”And on “Driving,” Missal delivers one of the album’s most mesmerizing moments, with her flowing melody, hypnotic rhythms, and ethereal vocals merging with a quiet grandeur that’s simultaneously escapist and inspiring. “‘Driving’ is about being on the precipice of taking control over your life—that feeling of seeing something you want in the distance and making the decision to go for it,”says Missal. “It’s about saying ‘Even if it takes a long time, or I hit some bumps along the way, it’s all okay because I’m the one behind the wheel.’”

To date, Donna Missal’s songs have racked up more than 23 MILLION COMBINED STREAMS globally, and now with the release of her debut album ‘This Time’, Missal is excited to provide her fans more of what they love so much about her music. “This isn’t a record about love and loss and relationships,” Missal explains. “It’s about taking chances for yourself, figuring out who you are and really standing behind that. I made a point of putting myself out there as a real person navigating this life at this moment in time, because I want to do whatever I can as an artist to help people feel more confident in navigating their own lives. I’d love for the listener to receive the message that you can take your time to learn and love yourself. That’s been the most important discovery that I want to share with this album.”

Donna Missal’s is a voice that comes around only once in a lifetime, a tour not to be missed 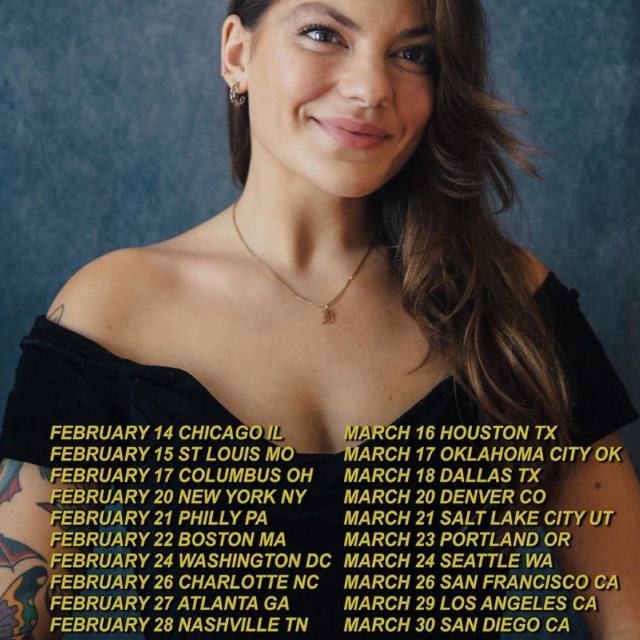 Donna Missal will be touring the West Coast with King Princess later this month. The run includes sold-out shows in Seattle, Vancouver, San Francisco and Los Angeles. See below for itinerary. Visit donnamissal.com for ticket information.

Missal’s singles have racked up more than eight million cumulative streams worldwide. After Zane Lowe premiered her original demo version of “Keep Lying” on Beats 1, it shot to the top of the Spotify Viral and HypeMachine charts. Streams of the demo now exceed 1.5 million in the U.S. Missal’s newly recorded version of “Keep Lying,” produced by Tim Anderson (Solange, BANKS, Halsey), will appear on her debut album, which will be released later this year by Harvest Records.

Lowe premiered Missal’s “Girl” on Beats 1 last month and praised its “timeless, latter day Prince vibe.” Idolator hailed the track as “raw and vulnerable…She sings about the emotional damage inflicted when ‘women hate on other women’ (her own words) over a sparse, soulful arrangement.” The official video was directed by Justin Bettman, who has earned acclaim for the ongoing art project Set in the Street, which repurposes found materials to create interior sets on city streets.

Missal is featured on two tracks from Macklemore’s latest album, Gemini: “Over It,” which she cowrote, and “Glorious.” She also featured on Rudimental’s “No Fear” and cowrote Leon Bridges’ “Bet Ain’t Worth the Hand.” “Power” – an original song she cowrote with Baz Luhrmann and recorded for Netflix’s “The Get Down” – won a Hollywood Music in Media Award for Best Original Song. Her songs have also been licensed by such shows as “House of Lies,” “Easy” and “The Vampire Diaries.”

Check out Missal’s powerful, stripped-down performances in her recent series of “Live from Capitol Studios” videos:

Supporting King Princess on all dates except October 12-14.

Donna Missal’s new single, was given its world premiere today by Zane Lowe on Beats 1. Lowe said, “I love the modern production, the feel of it. But it also has like a timeless, latter-day Prince vibe to it.”

AvailableHERE,  “Girl” touches on a subject that’s rarely discussed in any forum, the emotional damage inflicted when, as Missal sings, “women hate on other women.” The stripped-back yet intricately textured track unfolds with both gentle playfulness and piercing vulnerability.

“It’s been amazing to see this huge influx of art, music and media by women and for women intended to support and encourage every kind of women to claim our space. I think it’s important to identify what makes us stronger and louder, and we have proven that we can shift the culture around us by coming together to address our common issues and goals,” says Donna Missal. “When we criticize and attack one another, we diminish our voice in the conversation for equality and social change, so I wanted to write something that speaks on that experience. I don’t know a single woman who hasn’t experienced this in some way, and I want to see that change.”

The official video, directed by Justin Bettman, can be viewedHERE.  Bettman  who has earned acclaim for the ongoing art project Set in the Street, which repurposes found materials to create interior sets on city streets  also helmed the video for Missal’s, “Driving.”

“Girl,” which was produced by Tim Anderson (Solange, BANKS, Halsey), is the third in a series of two-track singles from Missal. The A-side is a studio version of “Girl” while the B-side is a stripped-down live take. Today, Missal also shared a live performance video of the song. View “Girl” (Live from Capitol Studios) HERE.

Missal, who will release her full-length debut on Harvest Records later this year, will open forMax Frostat Baby’s All Right in Brooklyn on June 20 and headline The Hi-Hat in Los Angeles on June 23.

Her debut single, “Keep Lying,” premiered on Zane Lowe’s Beats 1, then shot to the top of the Spotify Viral and HypeMachinecharts. Hailed by Milk as an earth-shaking vocalist with unique resonance, she is featured on two tracks from Macklemore’s latest album, Gemini: “Over It” which she co-wrote, and “Glorious.” Missal also featured on Rudimental‘s “No Fear” and co-wroteLeon Bridges, “BetAin’t Worth the Hand.” “Power,” an original song she co-wrote with Baz Luhrmann and recorded for Netflix’s “The Get Down” won a Hollywood Music in Media Award for Best Original Song. Her songs have also been licensed by such shows as; House of Lies, Easy and The Vampire Diaries.

Get it on Amazon Music: https://donnamissal.lnk.to/GirlPR/Amazon

Get it on Google Play: https://donnamissal.lnk.to/GirlPR/Google-Play