AQUAhydrate® has initiated a new partnership with Wounded Warrior Project®(WWP) and is donating $10,000 this summer to help honor and empower wounded warriors. AQUAhydrate is promoting the partnership with a co-branded camouflage edition of their Gallon package, the fastest-growing SKU in the high pH water segment. Available now through the 4th of July, the AQUAhydrate Camo-Gallon can be purchased at CVS, GNC and other fine retailers.

WWP is focused on supporting injured veterans, which includes providing free services in mental health, career counseling, and long-term rehabilitative care. Through its partnership with WWP, AQUAhydrate is helping to make sure warriors are supported on their journey to recovery.

AQUAhydrate, Inc. is a Southern California-based performance lifestyle beverage geared towards the new generation of millennial consumers. Through a proprietary process, its water is purified to some of the most rigorous standards in the industry, supplemented with electrolytes and natural trace minerals and then elevated to an alkaline pH of over 9. It is this powerful synergy between alkalinity, electrolytes and minerals which fuels ultimate hydration, balance and performance.  AQUAhydrate is the water of choice of health/fitness authorities, professional athletes, and sports teams. Leading health and wellness expert, Jillian Michaels, spearheads all health and fitness efforts as AQUAhydrate’s Chief Wellness Officer. AQUAhydrate also boasts active investors and board members Mark Wahlberg and Sean “Diddy” Combs as owners. AQUAhydrate is available at retail locations across the U.S. as well as Amazon.com and GNC.com. Follow on Facebook, Instagram and Twitter.

Since 2003, Wounded Warrior Project® (WWP) has been meeting the growing needs of warriors, their families, and caregivers – helping them achieve their highest ambition. Every journey is different, and Wounded Warrior Project meets warriors wherever they are on their journeys to recovery. Learn more at woundedwarriorproject.org.

NEW YORK, NY (August 3, 2018) — After making history as the very first winner of FOX’s The Four: Battle for Stardom, Evvie McKinney returned to the show’s season 2 finale last night to perform her debut single “How Do You Feel” for the very first time.

Executive produced by The Four judge Sean “Diddy” Combs, “How Do You Feel” is available via Republic Records HERE now.

“I knew Evvie was special from the moment she walked on that stage, she had that star quality and an incredible voice. I have a good intuition about talent and I got that feeling with her. This song is a smash and this the just the beginning of her journey,” said Combs.

“How Do You Feel” illuminates both the power and nuances of Evvie’s voice. She delivers emotionally charged verses before a soaring and soulful hook confronting a cheating ex.

It’s the perfect introduction to her sound, and it heralds the release of more new music from the 20-year-old rising powerhouse very soon.

With undeniable spirit, mile-high range, and earthquaking delivery, Evvie McKinney exudes her own sense of style, swagger, and soul that’s both classic and current.

Born and raised in the birthplace of Soul and Rock ‘n’ Roll Music Memphis, TN, the 20-year-old made history when she emerged as the first winner of FOX’s hit series The Four: Battle For Stardom. However, her journey began at five-years-old when she joined her first choir at the urging of her mother and musician father. One of seven kids, she faced hardship throughout childhood with dad passing in 2005 and mom struggling to support the family. Living in a home provided by Habitat for Humanity, Evvie pursued her dream relentlessly. She went from the Young Actors Guild Theatre and Dance Company to Stax Music Academy where she assumed the role of lead singer and actress. Along the way, she performed for everyone from David Porter to LaLa Hathaway and shared the stage with Sam of Sam and Dave and Larry Dodson of The Bar-Kays, to name a few. By 2015, she achieved a National YoungArts Foundation scholarship and would be recognized as its “Merit Winner” in Popular Voice.

2017 saw her audition for The Four. From the jump, she instantly captured the hearts of millions by belting out classics from Aretha Franklin and Tina Turner in addition to serving up a heart-wrenching rendition of the Academy® Award-winning “Glory” by Common and John Legend. Now, she stands poised to leave an indelible mark on soul with her debut single “How Do You Feel” and more music on the horizon. 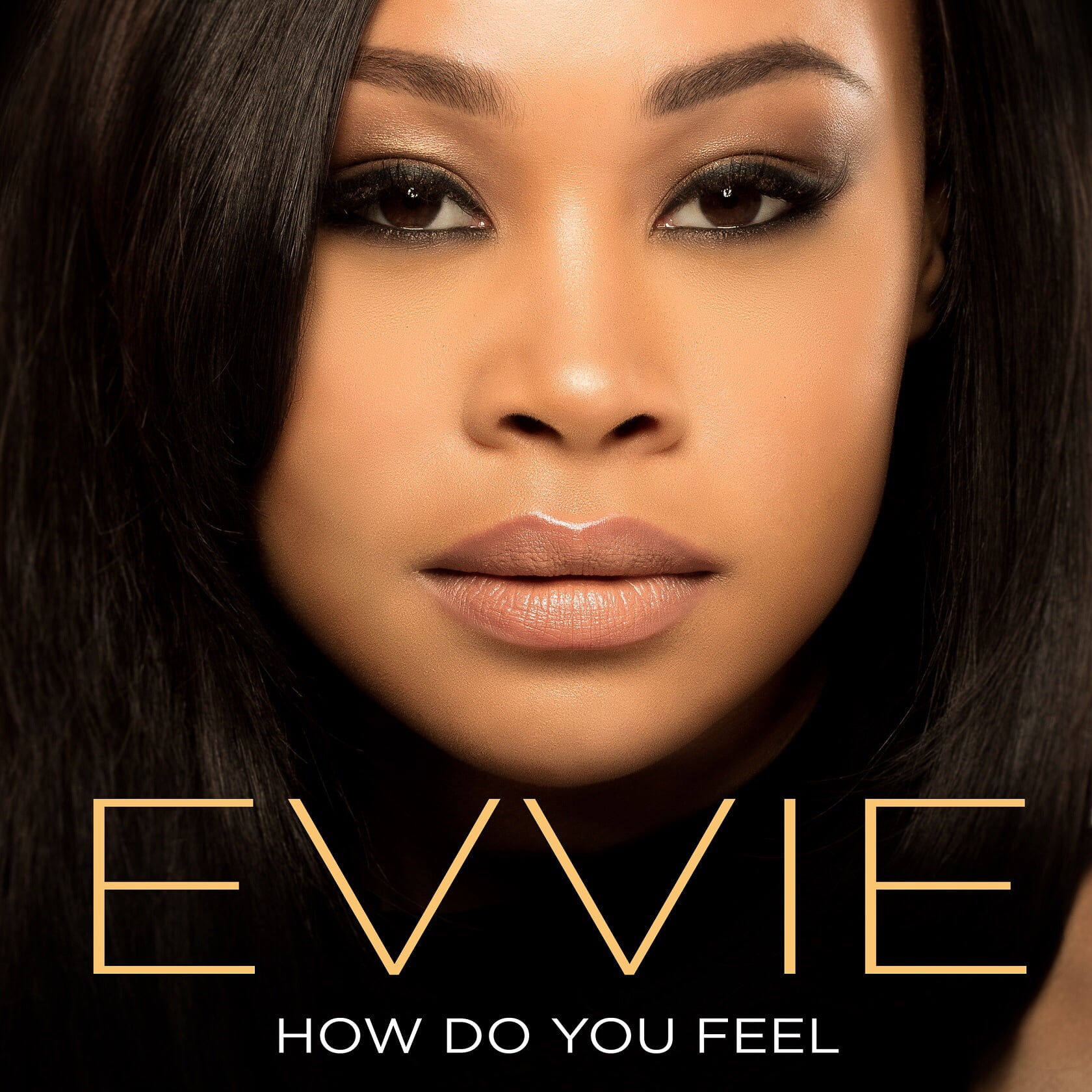 Tens of thousands of fans, friends, and family touched by the everlasting light of Jahseh Onfroy a.k.a. XXXTentacion congregated at Florida Panthers Stadium in Sunrise, FL to commemorate his life and celebrate the legacy he built earlier today.

Planned by his mom, the public viewing and fan memorial allowed audiences to pay their respects to the multiplatinum game-changing artist together and do so in harmony. A moving tribute video created by Justin Staple, Quinton Dominguez, and Tyler Benz [Vice/Noisey] played for the capacity crowd during the proceedings as XXXTentacion’s music played inside and out of the stadium. Various celebrity VIPs attended, including Lil Yachty, Ugly God, Denzel Curry, Skai Jackson, Lil Uzi Vert, Adam 22 and more. Fans also left thousands of messages on commutative poster boards. XXXTentacion’s tribute video and images from the memorial can be found below.

This represents the culmination of a week of memorials across the country by fans everywhere. Beyond an outpouring of social media support from Kanye West, Diddy, J. Cole, Big Sean, and more, Academy® Award winner Jamie Foxx took to the stage at the BET Awards to deliver a moving message in remembrance. Longtime friend and collaborator Ski Mask The Slump God donned a mask in honor as further tributes poured in from the ceremony courtesy of actor Christian Keyes, Desiigner, and many others. Meanwhile, Meek Mill sported an XXXTentacion shirt during his much talked-about performance of the new single “Stay Woke.”

XXXTentacion remains the voice of his generation, and that voice will live on forever.

The Pirelli 2018 Calendar by Tim Walker was presented today at the Manhattan Center in New York. For the 45th Calendar edition, shot in London last May, the British photographer applied his unmistakable style of extravagant sets and romantic motifs, to revisit one of the classic stories of British literature: “Alice’s Adventures in Wonderland”. His inspiration came not only from Lewis Carroll’s fantastic story, but most importantly from the illustrations that Carroll himself had entrusted to John Tenniel for the first edition of 1865. In Tim Walker’s 2018 Pirelli Calendar they become 28 shots consisting of 20 different and extraordinary sets for a new unique Wonderland. 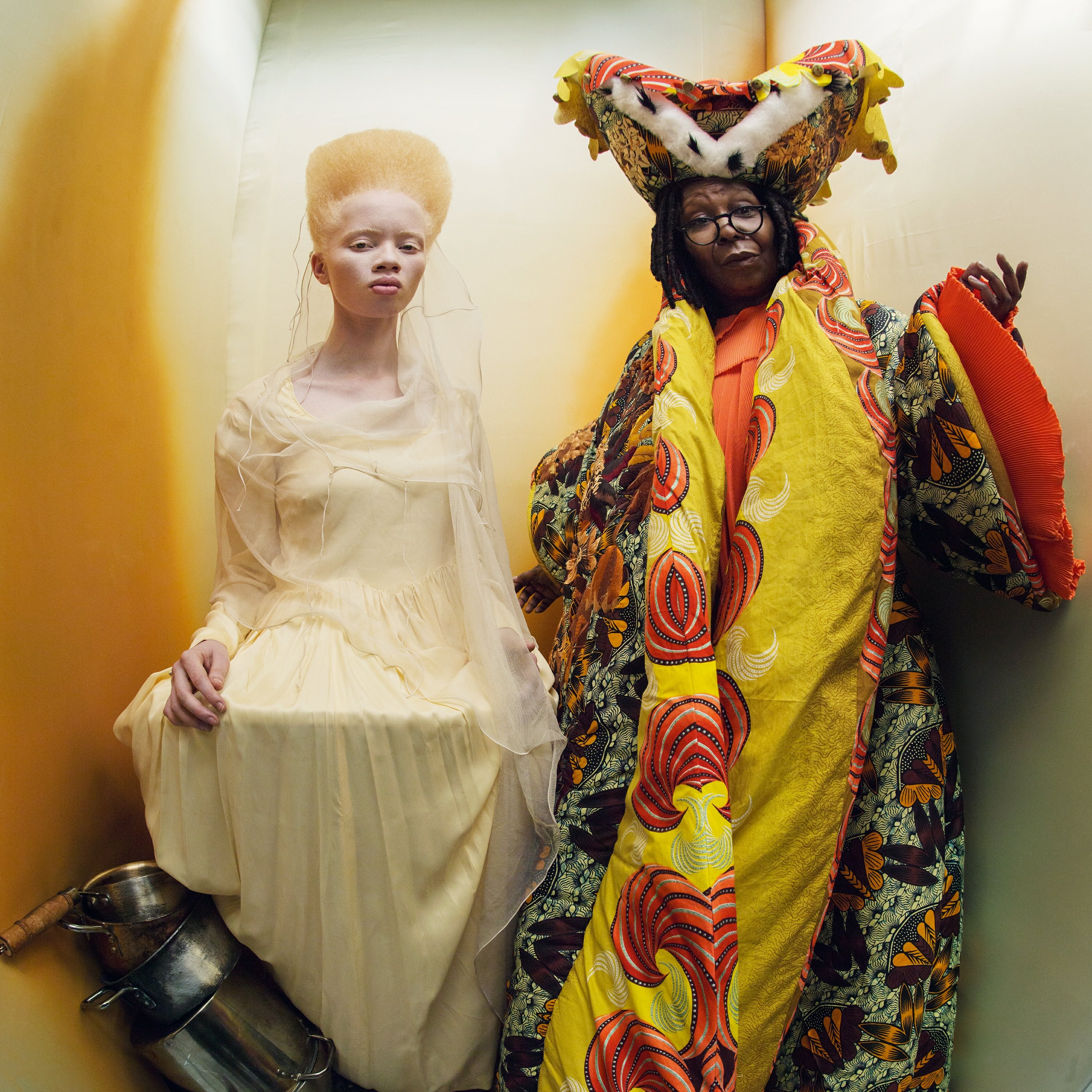 ”Alice has been told so many times”, Tim Walker said, “and I think I wanted to go back to the genesis of the imagination behind Lewis Carroll so that you could tell it from the very beginning again. I wanted to find a different and original angle”.

All together they form an all-black cast, for the second time after the 1987 Pirelli Calendar in which British photographer Terence Donovan shot five beautiful black women, including a then sixteen-year-old Naomi Campbell and model, writer and activist Waris Dirie.

To realize his Calendar, following last year’s creation by Peter Lindbergh, Walker collaborated with two eminent artists in their own right: Shona Heath, one of Britain’s leading creative directors and set designers, and the fashion icon Edward Enninful who was the stylist behind this year’s elaborate costumes. 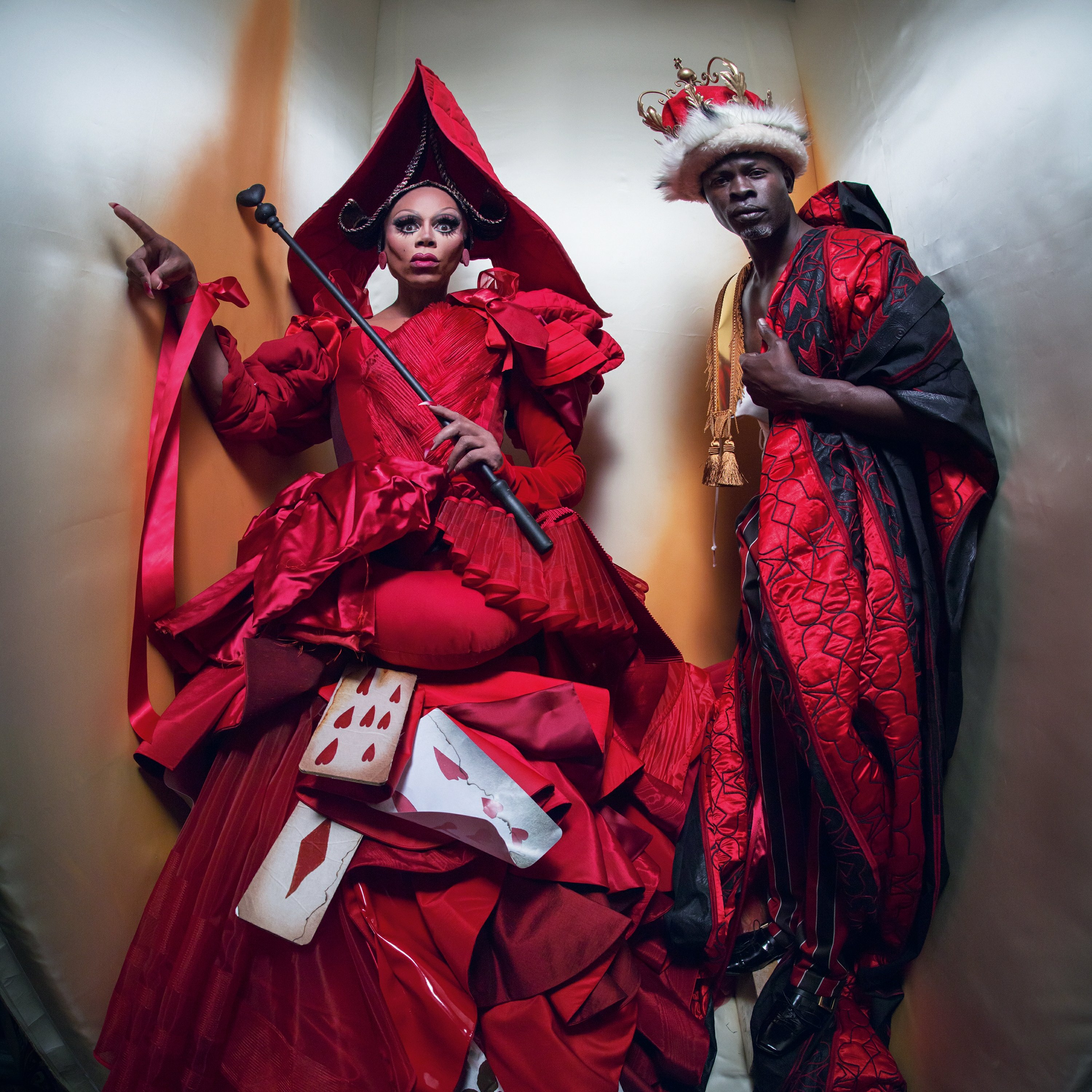 Shona Heath was responsible for creating the striking sets and installations which allowed for the creative storytelling in this depiction of Alice’s Adventures in Wonderland. Elements of the tale which are today part of our collective imagination have been turned upside down, for example: the white rabbit has become a black rabbit while the Queen’s red roses have been painted in black by the Playing Cards. “I was always trying to find something to turn on its head, question what the story meant and what was the important bit, and how far could it diversify. We’re still making a very clear message that is very true to the story, actually,” Heath said.

Commenting on his contribution to this year’s calendar, Enninful who recently became both the first male and first black editor of British Vogue said. “It is very important that the story of Alice be told to a new generation. Her adventure in Wonderland resonates with the world we live in today; obstacles we have to overcome and the idea of celebrating difference. Growing up in London I often lived in a fantasy world of fairy tales and detective novels. Alice was always one of my favourite characters. I always felt I was with her on the journey through Wonderland, and all of these extraordinary characters became my friends…well all but the scary Queen and her beheaders…To see a black Alice today means children of all races can embrace the idea of diversity from a very young age and also acknowledge that beauty comes in all colours. Culturally we are living in a diverse world. Projects like this remarkable Pirelli Calendar demonstrate that there is still hope in what sometimes feels like an increasingly cynical reality”.

In the words of Robert Douglas-Fairhurst, Professor of English Literature at the University of Oxford, Fellow of the Royal Society of Literature and author of the essay Being Alice (enclosed in the press kit), what is “interesting is Tim Walker’s refusal to turn Wonderland into a piece of Victorian kitsch.” In his essay Fairhurst emphasizes that “although ‘Wonderland’ sounds like a magical place, what strikes many children when they first read the story is how scary some parts of it are. Even Alice finds herself being threatened by her own dream. Almost all the creatures she meets are cranky rather than cuddly. […] 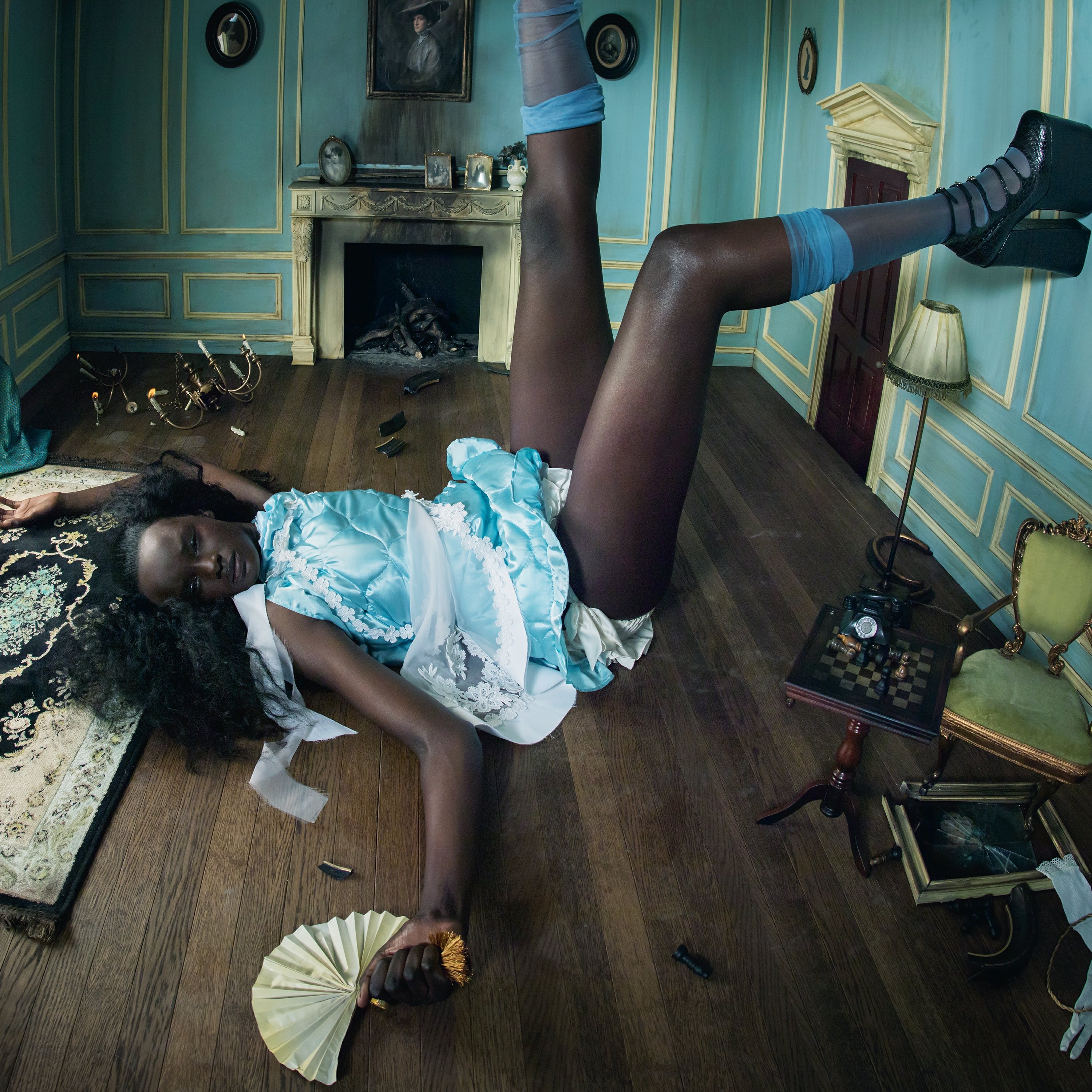 But of course at the heart of everything there are Walker’s photographs of Alice. Still Alice. No longer a child, here she is played by a model of unearthly beauty (Duckie Thot) whose personal history, as the child of Sudanese refugees who moved to Australia, makes her an ideal modern incarnation of Carroll’s restless and rootless heroine. Meanwhile the Pirelli Calendar as a whole offers a perfect demonstration of the fact that Lewis Carroll’s story remains a work in progress.”

What goes on behind the scenes, the photo shoots, the stories and personalities of the 2018 Pirelli Calendar can be all found on the dedicated website, www.pirellicalendar.com, where visitors can explore the history of more than 50 years of The Cal™ through films, interviews, photographs and previously unpublished texts.