BRIAN JUSTIN CRUM DROPS NEW VIDEO “WE ARE THE CHAMPIONS” ON THE HEELS OF HIS BIG AMERICA’S GOT TALENT: CHAMPIONS WIN

The show-stopping talent, who garnered millions of views from his performances of Queen, Michael Jackson, Radiohead and Phil Collins –generated some of the highest online statistics seen by the show’s talent. He also won the hearts of the audience who resonated with his story of being an overweight, bullied, gay teen. He strongly supports anti-bullying and LGBT efforts.

Check out “We Are The Champions” here.

Crum also appears in the Queen musical ballet “Somebody To Love” on February 14.

He will be releasing singles, video and a new album this year. Follow @brianjustincrum

Camilla Blackett (Fresh Off the Boat, New Girl) will adapt the screenplay for Taking Flight, which follows DePrince’s life as an orphan in war-torn Sierra Leone as she overcomes great odds to become a world- famous ballerina. DePrince was featured in the 2012 ballet documentary First Position and later debuted as a professional dancer at the age of 17 in the Joburg Ballet in South Africa. She appeared in Beyonce’s 2016 cultural phenomenon “Lemonade” and is currently a soloist at the Dutch National Ballet.

Madonna made her directing debut on 2008’s Filth and Wisdom, a comedy centered on three flatmates living desperate lives in London which she co-wrote with Dan Cadan. She also directed and co-wrote 2011’s W.E. alongside Alek Keshishian. The drama chronicled the relationship between British King Edward VIII and American divorcee Wallis Simpson.  Her upcoming projects include co-writing and directing a film adaptation of Andrew Sean Greer’s novel, The Impossible Lives of Greta Wells. Tentatively titled Loved, the film portrays the protagonist’s relationship with her gay twin brother. She produced and wrote I Am Because We Are, a documentary looking into the lives of Malawi’s over one million orphans in the wake of the AIDS pandemic.

A master of personal and professional reinvention, Madonna is the highest-selling female recording artist of all time. She has sold more than 300 million albums worldwide and has won over 200 awards including seven Grammy Awards, two Golden Globes Awards and two Brit Awards.

Glickman said, “We could not be more thrilled that Madonna will bring this remarkable story to the big screen.  There is no director better suited to tell Michaela’s journey with passion and sensitivity, and we cannot wait to bring this film to audiences all around the world.”

Madonna said, “Michaela’s journey resonated with me deeply as both an artist and an activist who understands adversity,” said Madonna.  “We have a unique opportunity to shed light on Sierra Leone and let Michaela be the voice for all the orphaned children she grew up beside. I am honored to bring her story to life.”

Alloy Entertainment’s Leslie Morgenstein and Elysa Koplovitz Dutton will produce alongside Ben Pugh and Guy Oseary. Glickman and Tabitha Shick, MGM’s Executive Director of Worldwide Motion Pictures, are overseeing the project on behalf of the studio.

“We were immediately awestruck by Michaela’s journey and know Madonna’s vision and passion for the material will deliver a film that inspires audiences everywhere,” said Les Morgenstein.

MGM’s upcoming 2018 slate includes: The Hustle, a hilarious new comedy about two female scam artists, one low rent and the other high class, who compete to swindle a naive tech billionaire out of his fortune starring Academy Award winner Anne Hathaway and Rebel Wilson, will release in theaters on June 29; Fighting With My Family, a comedy-drama written and directed by Stephen Merchant, based on the true personal story of WWE Superstar PaigeTM and her family of professional wrestlers,starring Florence Pugh, Vince Vaughn and Dwayne Johnson, will release in U.S. theaters on September 14; Operation Finale, directed by Chris Weitz and starring Golden Globe Winner Oscar Isaac and Academy Award Winner Ben Kingsley will release on September 21; Creed II, a continuation of the Rocky saga, starring Golden Globe Winner and Academy Award nominee Sylvester Stallone and Michael B. Jordan, will be released in partnership with Warner Bros. Pictures on November 21.

Alloy Entertainment is behind the global television franchises Pretty Little Liars, Vampire Diaries and Gossip Girl and feature films Sisterhood of the Traveling Pants and Sex Drive. Most recently Alloy Entertainment produced Everything, Everything, with MGM and Warner Bros., staring Amandla Stenberg and is currently in post-production on Good Girls Get High for Verizon’s go90 directed by Laura Teruso.

Metro Goldwyn Mayer (MGM) is a leading entertainment company focused on the production and global distribution of film and television content across all platforms. The company owns one of the world’s deepest libraries of premium film and television content as well as the premium pay television network EPIX, which is available throughout the U.S. via cable, satellite, telco and digital distributors.  In addition, MGM has investments in numerous other television channels, digital platforms and interactive ventures and is producing premium short-form content for distribution. For more information, visit www.mgm.com.

With her stunning voice and intense drive, COOPER PHILLIP captures the undivided attention of most people around her. COOPER has always been a small town girl with big dreams. Born in Russia to a family of classical musicians, her adolescent years were shaped by her grandmother and aunt. Her mother, a master violin player, toured the world with various symphonies. This separation led COOPER to take comfort in music at an early age where she was mesmerized by the vocal stylings of Ella Fitzgerald. She learned many of her songs, paying close attention to her pronunciation and vocal tone.  At 12 years of age, COOPER went to live with her mother. It was a major adjustment for both of them, but her mom soon realized her daughter possessed a gift and encouraged her musical talents. Moreover, COOPER attended the prestigious Moscow State Classical Academy (she studied classical piano, theory, harp, jazz, blues, ballet and voice). Her vocal teacher at the academy introduced her to the music of Mariah Carey – COOPER was obsessed!

“I WOULD JUST LISTEN TO HER FOR HOURS, UPON HOURS.”

She diligently worked to expand her range and control her voice to impress both her audience and her teachers. She loved the challenge.

“[THERE’S] SOMETHING ABOUT BEING IN FRONT OF A [LIVE] AUDIENCE; AND WINNING A COMPETITION AT SUCH A YOUNG AGE, ONLY MADE ME MORE CURIOUS …. AND, I BECAME [MORE] INTERESTED IN SEEING WHAT I COULD DO WITH MY VOICE.”

She began singing every day, taking in the sounds of Barbra Streisand and learned both classical piano and harp.

Determined to pursue a career in music, COOPER’s mother allowed her to move to New York City at 17. With barely a dollar to her name, she worked and hustled, singing in weddings and clubs and sleeping in the storeroom of a restaurant where she sang. It wasn’t easy but she would not be deterred. After a few years in NYC, COOPER jumped at an opportunity to sing in Los Angeles. With a strong sense of direction, COOPER began pouring her heart into songs she would write for her debut EP, Walk A Mile. In writing, she found an outlet to tell her story of love and pain in soul-filled ballads like Black Box, Tough Love and her song, Silence.  She’s performed her music at various venues in LA such as Viper Room, Soho House, Spaghettini, Hotel Café and Sayers Club. 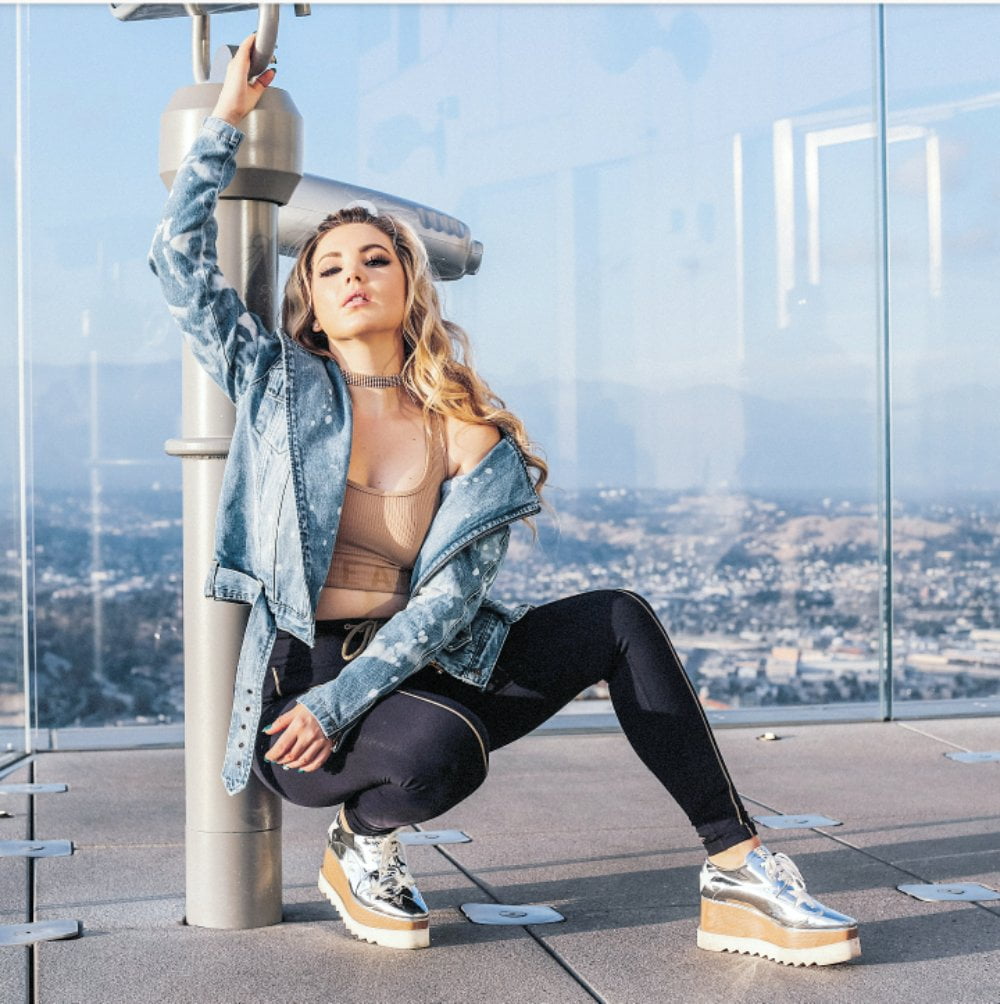 For additional information on this recording artist visit http://cooperphillipmusic.com.