The 2019 Toyota Corolla Hatchback makes a design comeback, leaving a lasting impression with innovative upgrades and engineering. SE base model starts at $21,000 and the XSE somewhere in the ballpark of $24,000. Our midnight black souped-up model’s MSRP is around $27,000 and is fully stocked with 18-inch wheels alongside a massive back spoiler to add drama. With every pen stroke, the architects produced a dynamic, athletic yet sophisticated vehicle. The world’s best-selling car just got remixed. So, we promptly accepted the manufacturer’s offer to road trip it to Vegas to check out our favorite pop stars Tinie Tempah, Ellie Goulding, and Pitbull at the JBL Fest hosted by special guest Quincy Jones.

Different from former models, this version possesses a longer wheelbase. The black mesh honeycomb grille, emphasizes the evolution of the Corolla and its increased width. To provide better forward visibility, the hood is constructed to sit two inches lower than earlier. The rounded physique makes a simple, yet powerful three-dimensional landscape that is comfortable and pleasing to drive. Moreover, the interior quality is more delicate and stylish. The XSE stitching on dash and door is bold and fashion-forward. Thus, when we pulled up to the SLS Las Vegas Hotel & Casino all eyes were on us. Furthermore, the hatchback has technologically advanced features: three-door Smart Key system; Apple CarPlay; Amazon’s Alexa and 8-inch touch display screen. Other amenities include an 8-speaker JBL audio system (excellent for fist-pumping), 2 USB ports and a single-zone automatic climate control; a leather shift knob and paddle shifters behind the steering rack.

The Safety Sense 2.0 includes pre-collision warning with pedestrian, cyclist and roadside detection as well as dynamic cruise control and lane departure alerts. Alarms are popular amongst users, who enjoy a visual alert on infotainment screen and then a ringing alert if detection becomes more fatal. Seats empower comfort with updated cushioning which minimizes fatigue and also are great for cornering while in Sport Mode. Ideal access to the steering wheel, pedals, and gear shift are available with power adjustable seat. 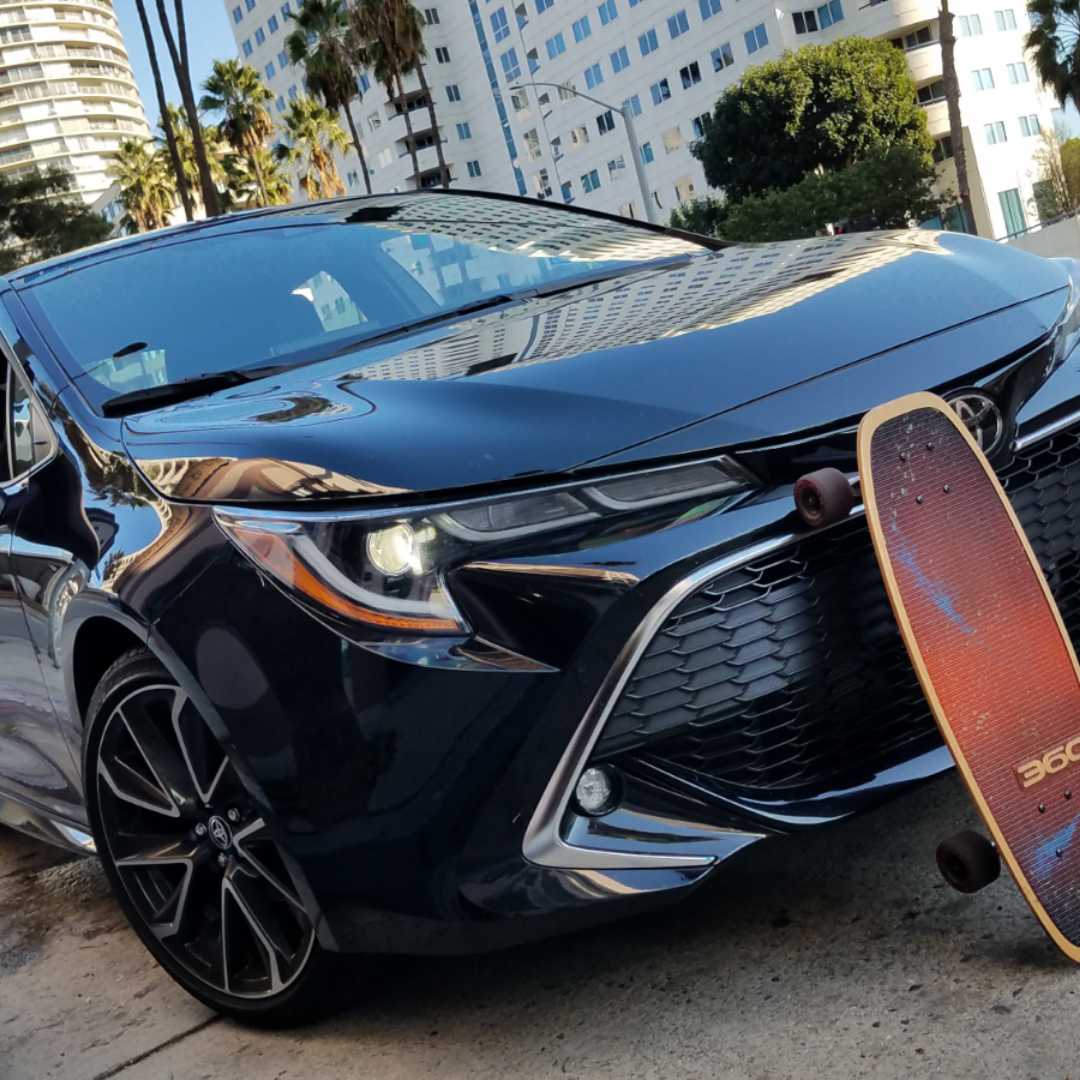 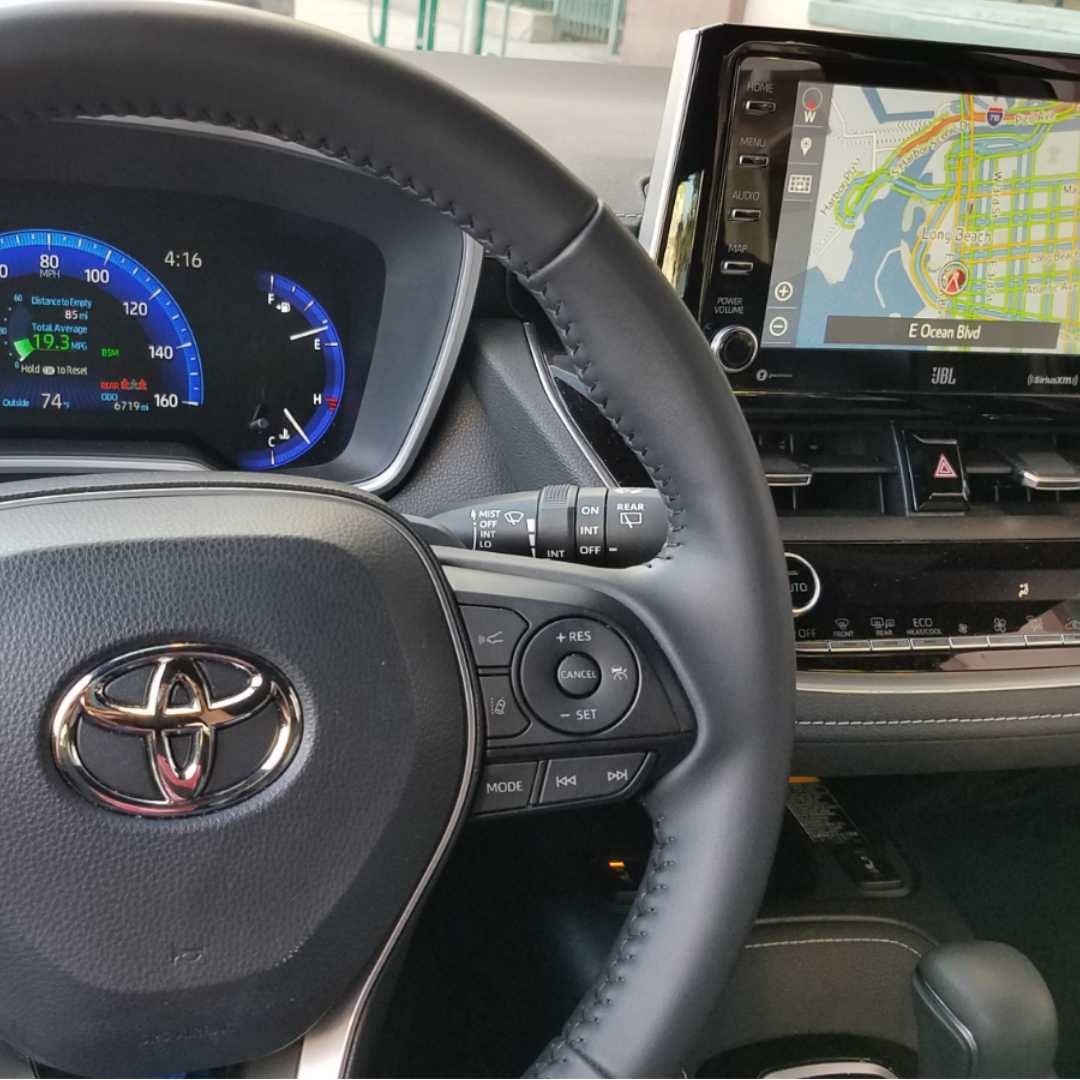 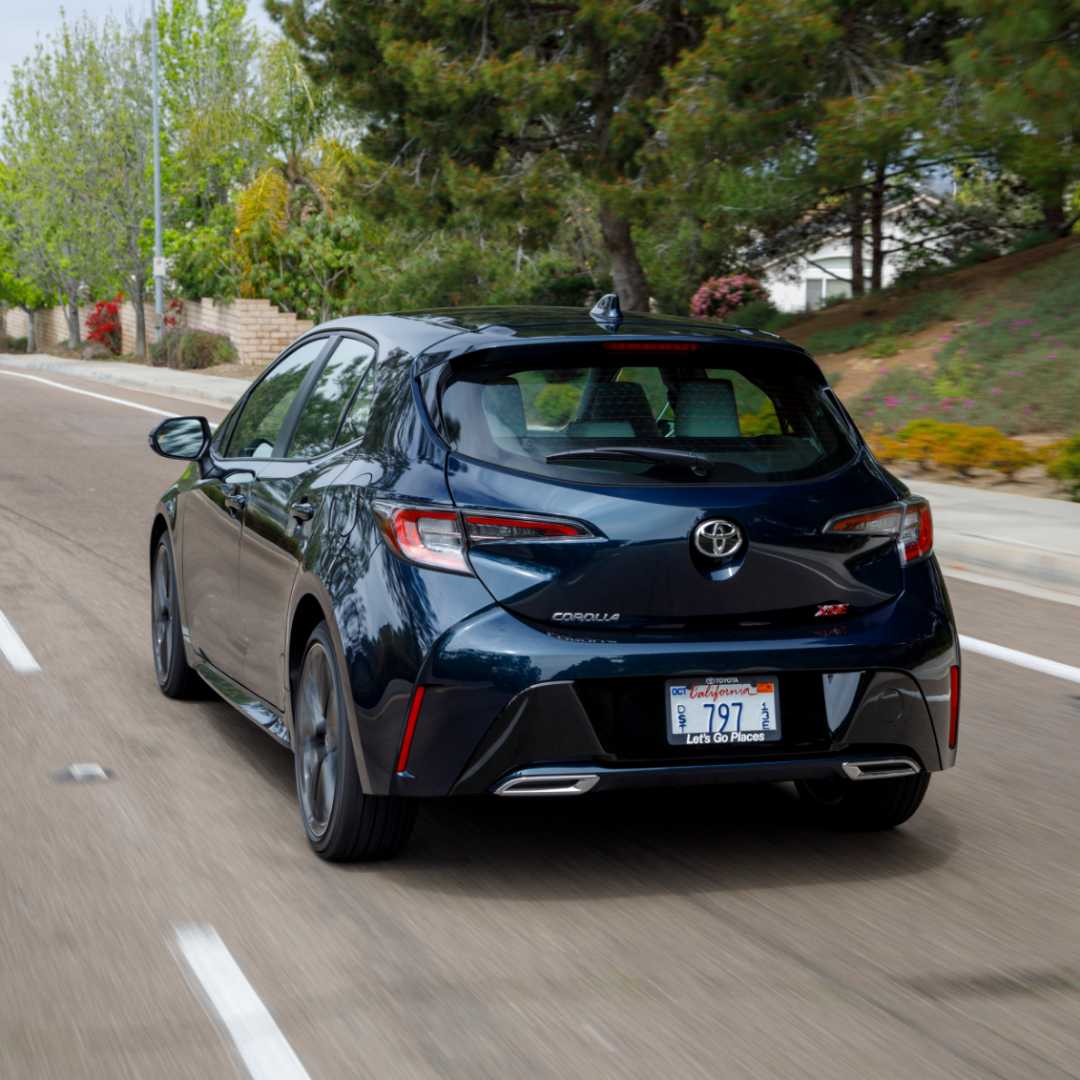 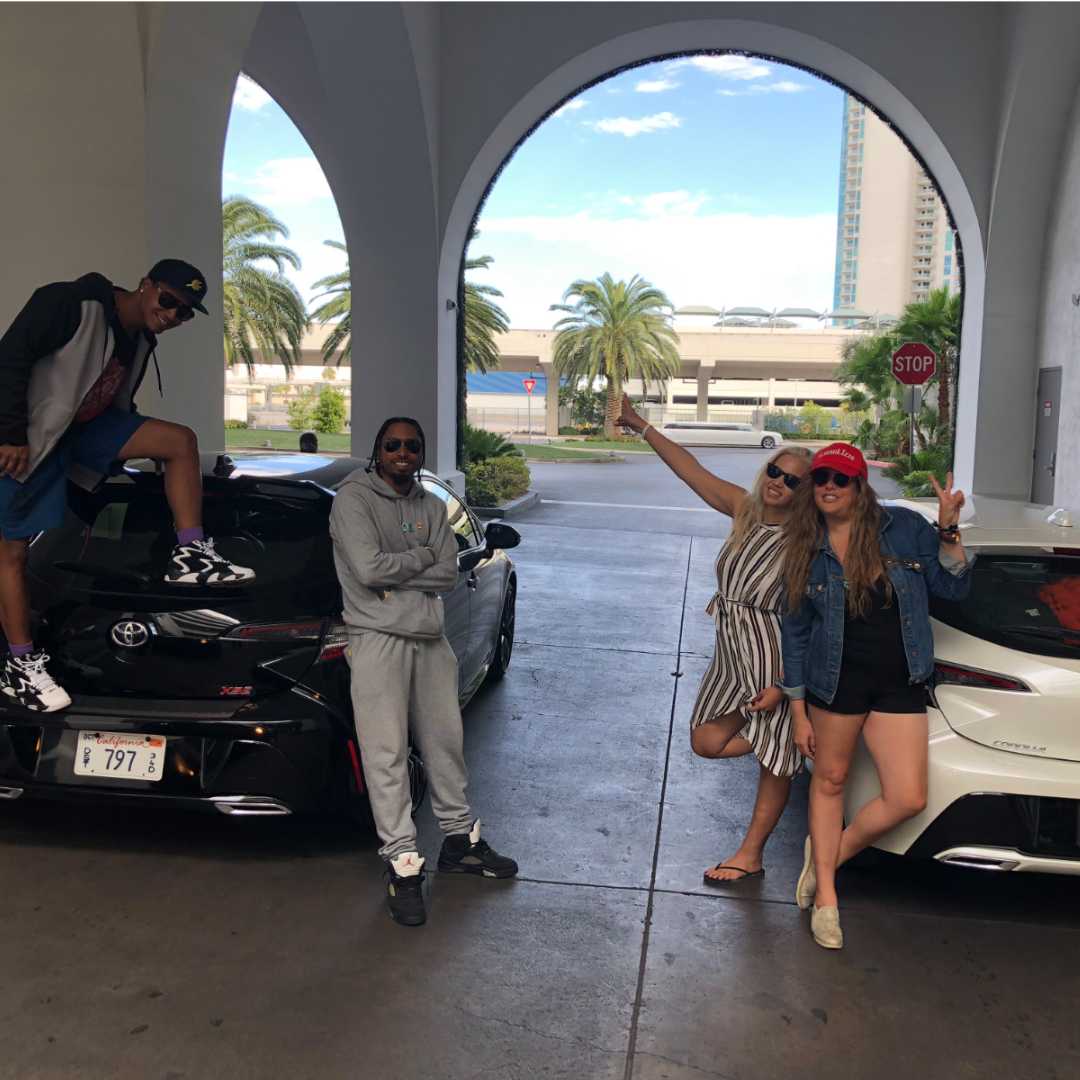 Both models benefit from multiple interior updates designed to provide drivers with a more comfortable and efficient in-vehicle experience. Enhancements to technology and connectivity include an updated Display Audio system that now features physical buttons and a volume knob for more intuitive control, improved voice recognition and Bluetooth® connectivity, a USB sub-cord and, similar to previous models, Apple CarPlay® and Android Auto™ integration standard on EX trims and above. In addition, steering wheel controls have been upgraded for simplified operation, the electronic parking brake has an indicator light for when it’s engaged, the center console sports larger cupholders, and there are physical buttons for fan speed on models with dual-zone climate control.

Civic Hatchback
At 20 percent of all Civic sales, Civic Hatchback is a key player in the Civic lineup, which continues as the top-selling retail car in America this year2 — a position it has held in each of the past two years. Civic Hatchback Sport, with its combination of eye-catching good looks and a dynamic driving feel, was named a 2017 AUTOMOBILE All-Star, a list dominated by sports cars and luxury marques. Civic Hatchback Sport, along with Civic Type R and Civic Si, also earned a coveted spot on the Car and Driver 10 Best list for 2018. Perhaps best of all, Civic Hatchback’s lively demeanor doesn’t detract from excellent EPA fuel economy ratings of 31/40/34 mpg3(city/highway/combined) for the LX, EX & EX-L Navi trims with continuously variable transmission (CVT).

Civic Type R
Civic Type R stormed onto the U.S. market last year, with an exclusive 2.0-liter 306-horsepower direct-injected VTEC® Turbo 4-cylinder engine and 6-speed manual transmission with automatic rev matching. With an adjustable suspension that includes Comfort, Sport and +R modes, Civic Type R is suitable as a civil and practical daily driver, with 22/28/25 city/highway/combined EPA fuel economy ratings, or an aggressive track star that has shattered records at some of Europe’s most celebrated racing circuits, including the famed Nürburgring.

Civic Type R has won numerous accolades since its introduction, including being named a 2018 AUTOMOBILE All-Star, and a 2018 Editor’s Choice by Car and Driver. On the racing front, Civic Type R TCR dominated the Pirelli World Challenge series by way of 11 podium finishes over the 12-race season en route to the championship.

In addition to the interior updates, the 2019 Civic Type R adds Sonic Gray Pearl to its palette of exterior color choices that also includes Championship White, a color exclusive to Civic Type R.

Ready or Not, Autonomous Cars are Coming: We are well past the point of autonomous vehicles being a fad. With several production cars around the world already coming from the factory with partial automation features, manufacturers, ride sharing companies, and rental car companies are in an all-out race to lead innovation in autonomous vehicle technology. That intense competition will also lead many to take risks.

Auto Insurers Betting on Autonomous to Decrease Frequency of Accidents: Auto insurers have already begun factoring the growth of autonomous and semi-autonomous technologies, such as forward collision warning with autobrake, adaptive headlights, and blind spot assist into future claims projections. In general, the industry is betting on autonomous technology to ultimately decrease the frequency of accidents, but not the severity of accidents that do occur.

You Are Being Recorded: One of the most interesting implications of the autonomous vehicle movement on the P&C insurance industry is the vast amount of data that is being collected by these technologies. According to a new studyconducted by J.D. Power in collaboration with Miller Canfield and Mcity, nearly three fourths (74%) of consumers say they are willing to share autonomous vehicle data after a collision, potentially giving insurers broad access into the details surrounding a crash and the ability to expand the current telematics offerings they currently have in place, which offer discounts to safer drivers. According to J.D. Power data, these telematics-powered offerings have been associated with high levels of insurance customer satisfaction.